A new biotechnology company is aiming to genetically resurrect the woolly mammoth by 2027.

Colossal, which launched on Monday, has received $15 million in initial funding for the project.

On its website, the company discussed the issue of extinction and its goal to "develop a de-extinction library of animals as well as housing genetic DNA/embryos from endangered animals."

"This process will slow the long-term impacts of human induced loss of biodiversity and give threatened species a buffer against outright extinction as numbers dwindle," the site read. 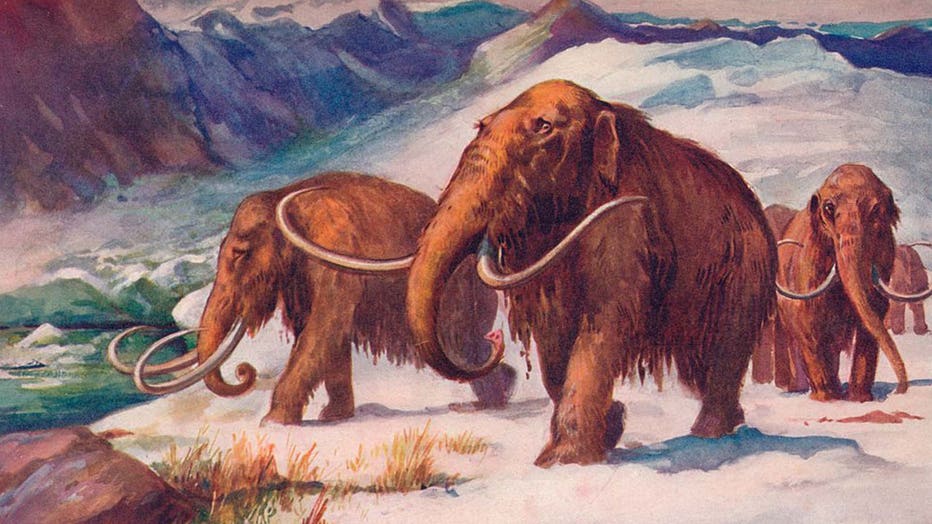 FILE - The early Ice Age, when mammoths roamed the Earth and Man was arising, 1907. From Harmsworth History of the World, Volume 1, by Arthur Mee, J.A. Hammerton, & A.D. Innes, M.A.

"The results from our lab will directly address issues related to loss in biodiversity and overall species counts resulting from the human-accelerated degradation of land, sea and air. Ultimately, the aim is to reverse this damage by reintroducing critical animal and plant species that played active roles in the preservation of some of Earth’s most climate-beneficial ecosystems. Many of which have all but vanished entirely today," Colossal added.

The company cited 10 "core truths" as reasons for reviving the furry, tusked animal, including an effort to mitigate climate change impacts, restore the Arctic, save modern elephants from extinction and drive advancements in multiplex CRISPR genome editing.

CRISPR, Colossal explained, is an "engineered cellular technology used for recognizing and cutting a specific code of DNA inside the nucleus."

"Once this DNA is cut, a laboratory modified version of DNA is inserted and reanneals the cut DNA by binding to the specific code," the company said.

RELATED:  Lake Huron sinkhole may hold secrets to how Earth got its oxygen

The development of the cold-resistant hybrid elephant to be re-wilded in the Siberian tundra – equipped with all of the core biological traits of the woolly mammoth – is already in process, according to Colossal.

"Our teams have collected viable DNA samples, and are editing the genes that will allow this wonderful megafauna to once again thunder through the Arctic," the company wrote.

"A CRISPR-Cas9 complex will use a single guide RNA from CRISPR to guide and recognize a specific sequence of DNA, where the Cas9 molecule will cleave those strands that are complementary to the CRISPR sequence. This allows for the reinsertion of the laboratory engineered DNA … Ultimately, giving us the ability to insert cold-resistant characteristics into elephant DNA – leading to the de-extinction of the woolly mammoth," Colossal continued.

"Therefore bringing the woolly mammoth back is not just a theory. It is a science that has been developed and mastered by George Church, Ph.D. and his lab," it said. "With a 99.6% genetic match in the Asian elephant, intact mammoth DNA, and modern genetic engineering, the task is well underway."

Colossal was co-founded by Church, a biologist at Harvard Medical School, and tech entrepreneur Ben Lamm.

"Never before has humanity been able to harness the power of this technology to rebuild ecosystems, heal our Earth and preserve its future through the repopulation of extinct animals," Lamm said in a statement. "In addition to bringing back ancient extinct species like the woolly mammoth, we will be able to leverage our technologies to help preserve critically endangered species that are on the verge of extinction and restore animals where humankind had a hand in their demise."

He told CNET that researchers hope to produce mammoth calves within four to six years. Woolly mammoths have been extinct for thousands of years.

Colossal will support research in Church's lab and others in Boston and Dallas, according to The New York Times.

Funding for the project, the paper said, comes from investors ranging from Climate Capital to the Winklevoss twins

However, many in the field have made known their skepticism regarding the hybridized Asian elephants.

"It’s not just about having them exist, but making sure that once they do exist that they can thrive and live a flourishing life," says S. Matthew Liao, the New York University bioethicist on Colossal’s scientific advisory board, told National Geographic. "Otherwise, you’re being cruel to these animals."