Louis Pioli was presented with his associate’s degree this week, decades after his anticipated graduation date of May 1944.

Niagara University, N.Y. - A 99-year-old veteran finally received the college degree that he put on hold more than 70 years ago in order to serve his country in World War II.

In September of 1940, Louis John Pioli began his studies as a freshman at Niagara University in upstate New York, according to the school. He finished his first year before he was drafted into the war.

Pioli served honorably as a glider trooper in the 13th Airborne Division and was stationed in France, the school said. After the war, he went home to his wife but never returned to the university to finish his degree.

His daughter, Lou Ann Pioli, said her father regretted not being able to finish.

“I heard him say, 'You know, I've always regretted not being able to finish my degree.' And three days later we got the annual report from Niagara University in the mail. And I said, 'It's a sign,'" Lou Ann told WCAX-TV.

She wrote to the university sharing her father's story and “detailing his commitment to family and the community,” according to the station, and her letter made an impact. 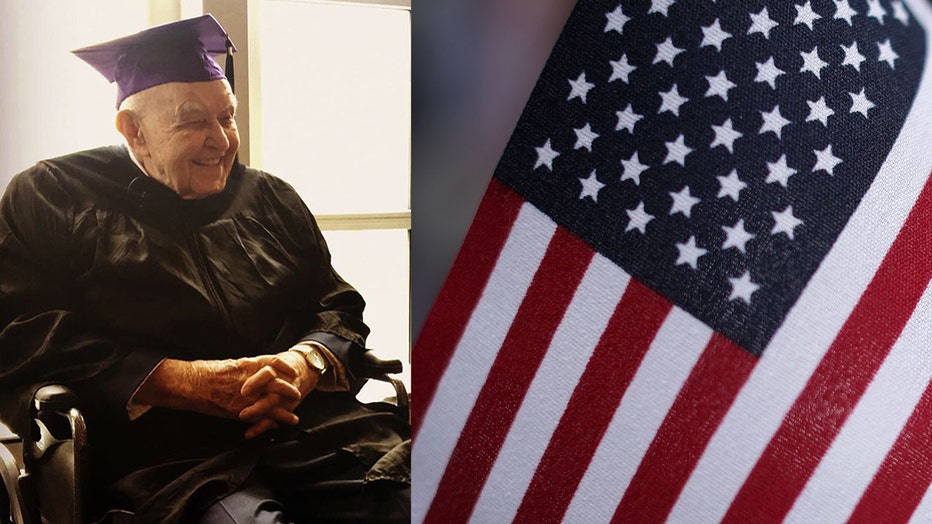 Louis Pioli was presented with his associate’s degree this week, decades after his anticipated graduation date of May 1944. (Photo credit: Niagara University and Alex Wong/Getty Images)

"We got together a group of senior administrators, talked it through and decided this would be a wonderful thing to do for Lou," Dr. Timothy Ireland, the provost of Niagara University, told the station.

The school said it was able to award him 21 credits of life experience to get him to the 60 credits he needed to earn his associate's degree.

At age 99, Pioli finally received his honorary degree from the university. He wasn’t able to make the trip from his home in South Burlington, Vermont to the New York campus to accept the diploma himself, so his grandson, Kevin Pioli-Hunt, accepted it on his behalf, according to the school.

The following Monday, Ireland then traveled to Saint Michael’s College in Burlington to present the graduate with his official diploma in person, according to the school.

"I'm doing great. Overwhelmed. I can't get over it," Pioli told WCAX-TV of the milestone.