NEW YORK - When Neil Armstrong and Buzz Aldrin took their first steps on the moon in 1969, the whole world was watching.

Few events in the history of mankind have ever been experienced by so many people simultaneously (at least relative to the era). From Houston to Hong Kong, NASA estimates that 650 million people watched Armstrong take those very first human steps onto the moon and heard him utter the phrase that generations to come would never forget.

"That’s one small step for a man, one giant leap for mankind." 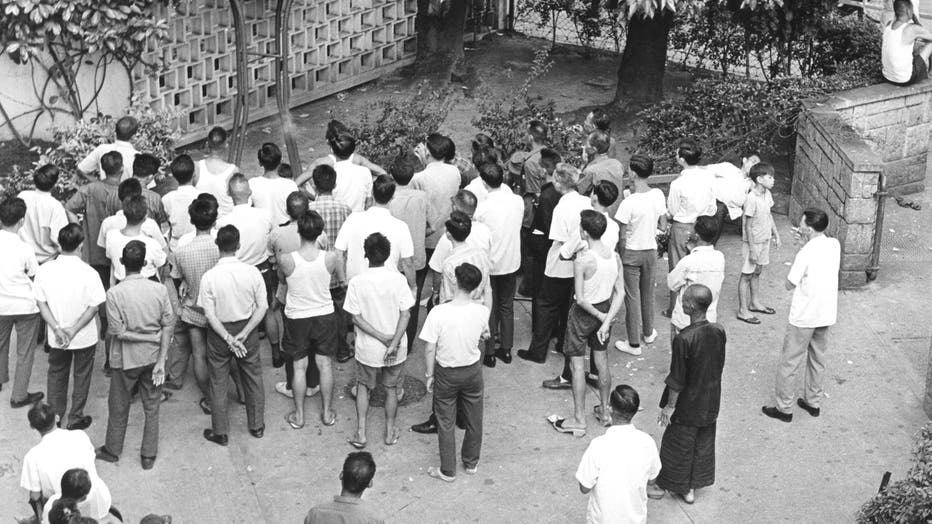 In a park, viewers gather around to watch the television broadcast of the Apollo 11 moon landing, Hong Kong, July 1969. (PhotoQuest / Getty Images)

Even though it was raining, New Yorkers gathered in Central Park and watched without any regard for their soaked clothes.

Thousands kept their eyes glued to a large TV in a pavillion at the World's Fair, Man and His World, in Quebec, Canada.

Parisians crowded cafes and sidewalks in front of storefronts filled with TV's. 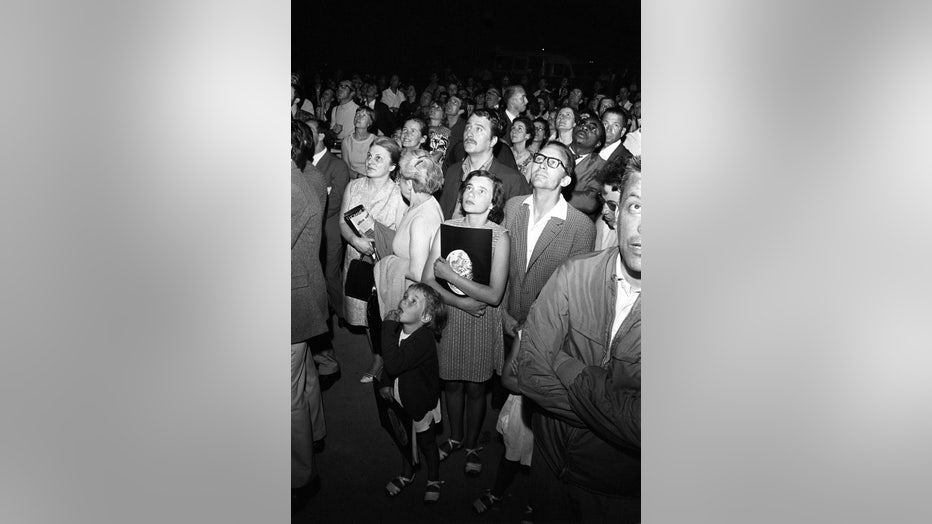 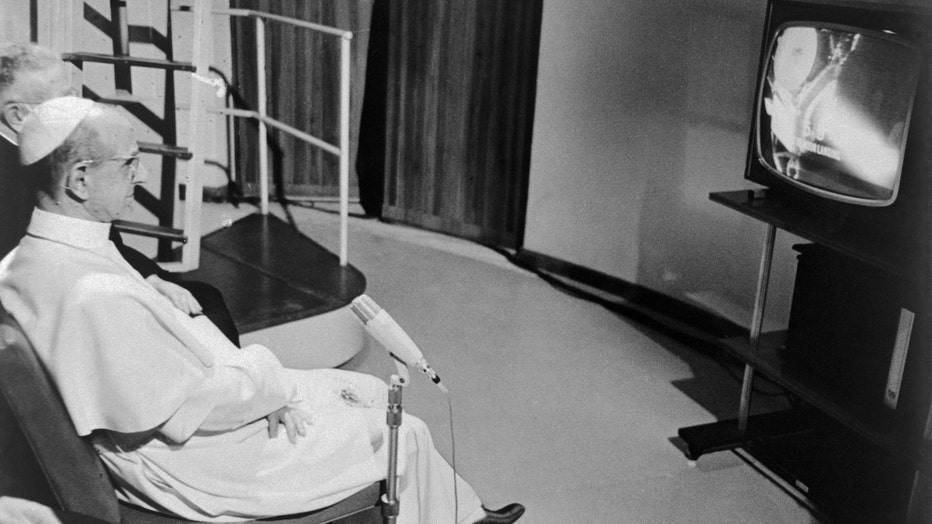 Pope Paul VI sits before a television set in his summer villa and watches the astronauts Neil Armstrong and Buzz Aldrin land on the moon. (Bettmann/Contributor / Getty Images)

Armstrong and Aldrin's families watched with bated breath at their homes, and the world cheered along with them when the two astronauts landed safely. 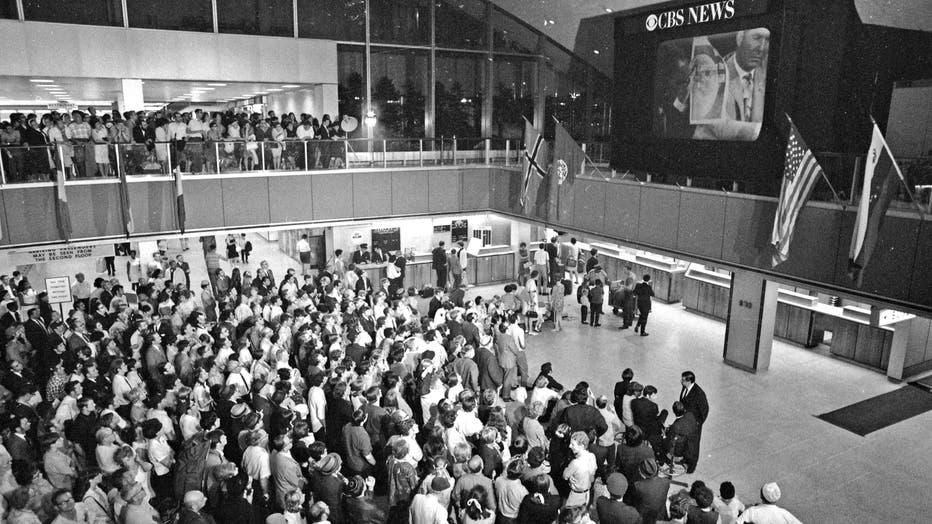 As Old Glory hangs over them, thousands of passengers and workers at Kennedy Airport International Arrivals Building stand or sit in awe as they watch on giant TV screen another American flag being raised on the moon. The crowd stands three deep on t (Dennis Caruso/NY Daily News / Getty Images)

The idea that anything is possible was firmly solidified in the minds of all who were watching. The moment marked a new era of human achievement and inspired countless young people to quite literally reach for the stars.

Some people who were barely 2 or 3 years old at the time of the mission can recall the moment of the moon landing as the first memory of their young lives.

Live TV coverage allowed hundreds of millions witnesses to history. They huddled in front of televisions at home and gathered in auditoriums and schoolrooms as the Apollo 11 astronauts ventured onto another world for the first time.

Even now, 50 years later, that day is still deeply etched in the memories of many.

The Smithsonian's National Air and Space Museum, NASA and others have gathered their stories for Apollo 11’s golden anniversary.

Here are five of the Smithsonian's submissions.They have been edited for length.

Frank Schramm of Montclair, New Jersey, was 12 years old and away at summer camp for four weeks of swimming, hiking and building rockets. The Apollo 11 landing was during his second week at Camp Watonka in Hawley, Pennsylvania. The only problem was that they didn't have a television there. At his suggestion, the camp rented a small 15-inch (38-centimeter) TV:

"It was set up that Sunday, July 20th, and there were only two chairs in the ping pong room. I staked out my place the whole day. I will never forget that evening of all 175 campers and I sitting in the chair, watching this small black-and-white TV with Neil Armstrong coming out of the lunar module in that very blurry image from the moon. The room was in total awe, you could hear a pin drop. I will never forget this day!“

Schramm has been fascinated with the moon landing ever since. He and his family even met Aldrin in 2016 when the former astronaut returned to Montclair to celebrate his old school being renamed Buzz Aldrin Middle School.

"I remember my mother letting my sister and me stay up late to watch the moonwalk. I love anything space related. I had a model of the Apollo 11 rocket, the lunar module, and the Star Trek Enterprise on my desk. I still have my scrapbook of newspaper clippings starting one week before blast off until the day the astronauts came out of quarantine on the Apollo 11 mission. I got to meet Buzz Aldrin at the Star Trek 30th anniversary convention in Huntsville, Alabama. It was one of the greatest thrills of my life!"

On July 20, 1969, David Waldrup of Reston, Virginia, was celebrating not only man's first steps on the moon, he was also chowing down on chocolate cake for his 15th birthday:

"I was a child of the space race growing up in the 60s and watching everything we did to put men on the moon. I built models of the Mercury, Gemini and Apollo spacecraft and read everything I could find on the vehicles and men flying them. But I was most excited when, on my 15th birthday, my family gathered around our TV to watch the live broadcast in Dallas, Texas, as Neil Armstrong walked on the moon.

What a birthday gift for an excited space nut! And then my next feeling was, wow, what are we going to do next? It's literally not just the sky, but outer space is the limit. And I can't wait to be part of it. And I knew at some level, I would be part of it somehow."

Waldrup started flying planes later that year. He eventually became a pilot in the Air Force and watched two of his buddies go on to become space shuttle astronauts. Waldrup is now a volunteer at the National Air and Space Museum's Udvar-Hazy Center in Chantilly, Virginia.

While others were watching in the wee hours of the night or morning, June Dorricott of Brisbane, Australia, was spending the afternoon home on an unofficial day off from school:

"I was seven years old and waiting at the bus stop in a little town called Toowoomba, Australia when my mother came up to get me. She told me I didn't have to go to school because a man was going to walk on the moon. Little Judy Wakefield, who was waiting with me, started to cry, and mum told her she had the day off too, so she could go home. I found out much later in life that we didn't actually have off school. I really think she thought it was important that we witness a man make history live on TV.

My memories of sitting in the living room in our house in Perth Street with mum, and watching on TV as the first man ever walked on the moon are precious to me in so many ways. My mother passed away a few years ago, and our family home was sold and then demolished. But they are both so vivid in my mind, it's as if they're still there.“

Peter Cowin in Cheltenham, England, stayed up until the middle of the night to watch the moon landing, with his parents' permission. "I was something of a space junkie at the time," he said. The 13-year-old was the only one awake; his family was headed on vacation later that day. But for him, it was worth missing sleep:

"At first the picture was upside down and horribly grainy, but it improved as time went on so I could see two ghostly figures — raising the flag, setting up experiments, and taking that 'giant leap for mankind.' The day after, it seemed as if the whole world was celebrating and uplifted at the thought of what 'we' had achieved. The moon landings showed us that mankind could achieve absolutely anything it set its mind to.

As a man in his early 60s, I have a much better understanding of the politics involved, the price paid — and just how close some of those Apollo missions came to catastrophic failure. But I will always be in awe of the bravery, commitment and determination of the 400,000-odd people who made Apollo such a milestone in the history of mankind — and the insight they gave us into our place in the universe."