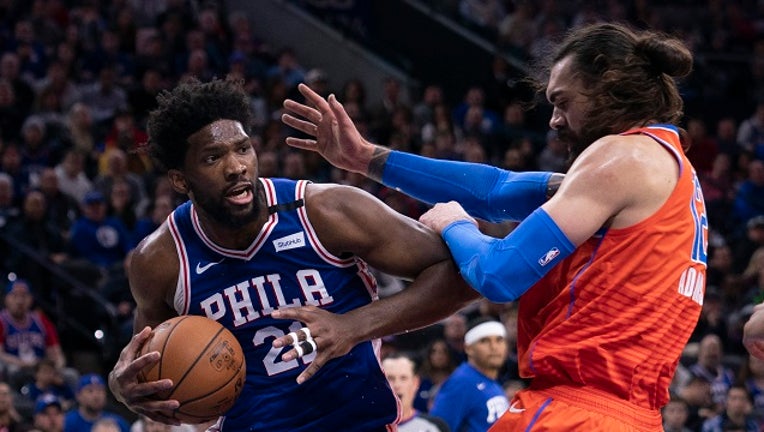 Joel Embiid #21 of the Philadelphia 76ers fouls Steven Adams #12 of the Oklahoma City Thunder in the second quarter at the Wells Fargo Center on January 6, 2020 in Philadelphia, Pennsylvania.

PHILADELPHIA - Sixers center Joel Embiid will have surgery Friday for a torn ligament in a finger in his left hand and will be evaluated in one to two weeks.

“All of a sudden, we’re different,” 76ers coach Brett Brown said. “We’re just different. I look at this as an opportunity. Nobody’s crying. This is not a ‘woe is me’ moment, not for me, at all. And not for my players. We’ll take what we have, and what we have, I love.”

Embiid injured the radial collateral ligament in the ring finger in the first half Monday night against Oklahoma City. Embiid’s overlapped his pinkie to the point that it seemed he had his fingers crossed. He played most of the game with his finger taped and said he “couldn’t go up with two hands.”

Embiid has struggled with injuries ever since he was drafted with the No. 3 pick of the 2014. He missed his first two seasons with various injuries and hasn’t played more than 64 games in any of the last three. He is averaging 23.4 points and 12.3 rebounds in 31 games this season.

Al Horford, signed away from the Celtics in the offseason with a four-year deal, started at center Thursday against the Boston Celtics.