In a league governed by a salary cap, finding productive players on low-cost rookie deals or bargained-based veterans can be the key to success in the NFL.

The teams taking the field for the playoffs this month all have plenty good deals to help along the way whether it’s a star quarterback on a rookie deal like Buffalo’s Josh Allen, a fourth-round rookie cornerback like Kansas City’s L’Jarius Sneed or a veteran cornerback like Xavier Rhodes, who signed a one-year, $3.5 million deal with the Colts.

Getting contributions at relatively low costs allows teams to spend big bucks for stars and helps build a playoff-caliber roster.

Many of the teams back home watching have some deals they regret that contributed to their struggles.

Here’s a look at some of the most overpaid players in 2020 at various positions with contract information from the website Over The Cap:

QB CARSON WENTZ: The Eagles gave Wentz a $128 million, four-year extension in 2019 and benched him before the deal fully kicked in. Wentz was paid more than $39 million in cash this season and had a cap hit of $18.6 million. Wentz led the NFL with 19 turnovers this season and was sacked a league-high 50 times before being replaced as starter by rookie Jalen Hurts. The Eagles now have to decide what to do with Wentz, who has a cap hit of more than $34 million next season. Philadelphia can try to trade him but would still carry a dead cap hit of more than $33 million or keep him as a high-paid backup. 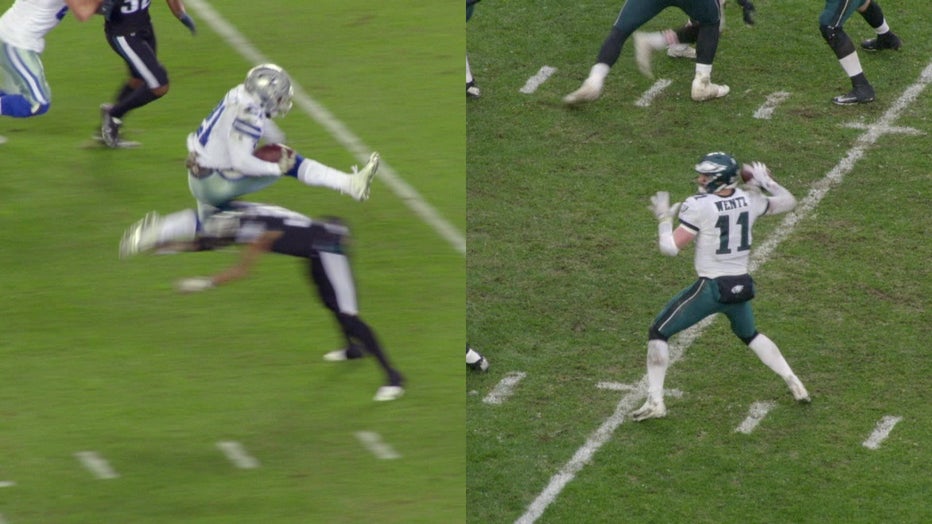 RB EZEKIEL ELLIOTT: The Cowboys gave Elliott a $90 million, six-year extension before reaching a deal with quarterback Dak Prescott. Now they have the difficult task of trying to reach a long-term deal with Prescott or using the franchise tag at close to $38 million on a reduced cap in 2021. Elliott is coming off the least productive season of his career with 979 yards and six TDs while getting paid nearly $11 million for a team that finished 6-10.

Backup Tony Pollard was more productive than Elliott in limited time but the Cowboys are on the hook to pay Elliott more than $30 million the next two seasons with a heavy dead cap penalty if they choose to move on.

WR A.J. GREEN: The Bengals got string production from Green in his first seven seasons but he was limited to nine games because of a toe injury in 2018 and missed all of 2019 with an ankle injury. Cincinnati used the franchise tag on Green this season and paid him more than $18 million in hopes that his veteran presence would help rookie quarterback Joe Burrow. But Green had just 47 catches for 523 yards in 16 games, providing little value for his big salary.

TE ZACH ERTZ: After years of being one of the most productive tight ends in the league, Ertz struggled in 2020 while getting pair more than $12 million as part of a disappointing Eagles team. Ertz’s 36 catches tied his career-low set as a rookie in 2013 and his 335 yards receiving and one TD were career lows.

OL TRENT BROWN: The Raiders used a big chunk of the money they saved by trading Khalil Mack to Chicago to sign Brown to a $66 million, four-year deal in 2019. Brown has played more than 10 snaps in just 14 of 32 games since joining the Raiders. He hurt his calf on the first play of the season and missed the next three games. He then played one full game before being sidelined by COVID-19. He returned for three games late in the season before missing the final game with a knee injury, giving the Raiders little value for his $21.5 million this season.

DL KAWANN SHORT: Short had a cap hit of more than $19 million this season as one of the only veterans on Carolina’s rebuilt defense. He played only three games this season before a season-ending shoulder injury. He didn’t produce much in his limited action with six tackles and no sacks in three games.

LB CORY LITTLETON: The Raiders viewed Littleton as their prized free agent acquisition after getting a $35.25 million, three-year deal this offseason. He was supposed to fill a more than decade-long hole as a playmaking linebacker who excelled in coverage against running backs and tight ends. That never materialized in a season Littleton described as miserable as he didn’t record a single sack, interception, forced fumble or fumble recovery all year. He also was beaten often in coverage on a defense that was once again one of the league’s worst.

DB A.J. BOUYE: The Broncos dealt a fourth-round pick to Jacksonville for Bouye and his $13 million contract in hopes he could help replace the departed Chris Harris Jr. Bouye struggled when he played and then was suspended for the final four games this season and first two next year because of performance enhancing drugs.