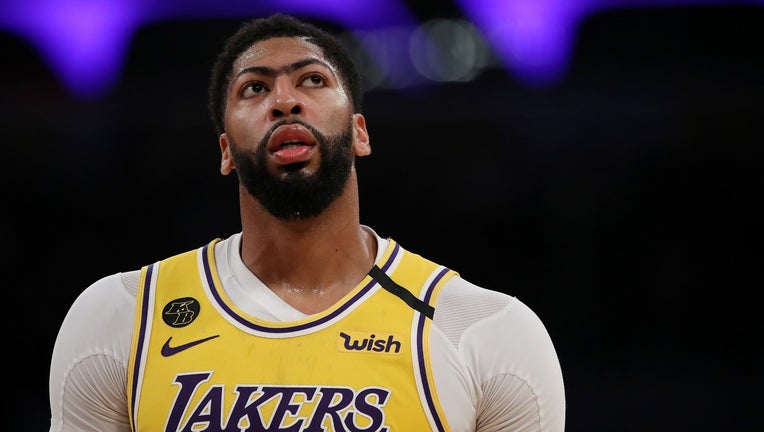 Anthony Davis of the Los Angeles Lakers looks on during the second half against the Philadelphia 76ers. (Photo by Katelyn Mulcahy/Getty Images)

And then shortly after halftime, 35-year-old LeBron James walked the ball upcourt and casually drilled a 3-pointer from the “R” inside the Lakers’ half-court logo.

The superstar duo had another full night of doing things that blow people’s minds.

Against an undermanned but lively Sixers lineup, Los Angeles needed most of that magic to win again.

Davis scored 18 of his 37 points during a phenomenal second-quarter surge, and the Lakers held off injury-depleted Philadelphia 120-107 on Tuesday night.

James had 22 points, 14 assists and seven rebounds for the Lakers, who moved to 47-13 with their ninth win in 10 games. His 40-footer was a stylish flourish on an entertaining all-around game from the Lakers’ two All-Stars, and it came at the end of a 44-10 run in roughly 10 minutes spanning halftime.

“That was a great stretch for our team, for our season,” Lakers coach Frank Vogel said. “To see us be able to take over a game like that was a positive sign.”

76ers’ Simmons out at least 2 more weeks with back injury

James and Davis had to carry them past the Sixers, who played without injured starters Joel Embiid, Ben Simmons and Josh Richardson. To James, the Lakers can learn from their slow start and big surge as they prepare to make a run at a championship in several weeks.

Davis hit four 3-pointers while grabbing 13 rebounds and going 13 of 19 from the field, with no basket prettier than his crossover to ditch Al Horford. He made all seven of his shots in the second quarter while the Lakers played some of their prettiest basketball of the year.

“I started off really slow and missed some shots that were wide open,” Davis said. “I was just trying to figure out how I could get myself going. Once one of us got it going, it got contagious until all of us got going.”

Glenn Robinson III matched his career high with 25 points and Tobias Harris had 18 for the Sixers, who have lost nine consecutive road games since Jan. 20.

Philadelphia lost twice at Staples Center to start its four-game California road trip despite this persistent effort against the powerhouse Lakers.

Philly’s role players and backups got off to an impressive start, taking an early 13-point lead. That’s when Davis took control with a dazzling quarter that included three 3-pointers. The Lakers made 17 of their 19 shots at one point.

“Obviously we played two really good teams here,” Harris said. “I felt like we had a good start, and then that second quarter hurt us. I think where the game really slipped was they picked up their defensive intensity, and from there it rushed us.”

Lakers: Alex Caruso missed his second straight game with a sore right hamstring. ... Los Angeles plays its next six games at Staples Center, with a “road” game against the Clippers on Sunday. ... Davis played despite a sore right knee that kept him out of LA’s last game. ... Dwight Howard had 11 points without missing a shot at the line or in the field.

James’ 3-pointer from the logo both put the Lakers up by 19 and set off a raucous standing ovation at Staples Center. When the Sixers quickly called a timeout, Davis joined JaVale McGee and Danny Green at midcourt to comically inspect the spot from which LeBron launched the shot.

“That was pretty funny,” James said with a smile.

The teams split their season series. The 76ers beat the Lakers 108-91 on Jan. 25 while James passed Kobe Bryant for third place on the NBA’s career scoring list. Bryant died in a helicopter crash the next morning, several hours after congratulating James on the accomplishment.

Philadelphia coach Brett Brown and his assistants wore Bryant’s sneakers on the bench. Bryant graduated from high school outside Philadelphia. “It’s a very small way, but it’s our way of showing the level of respect and appreciation and gratitude for everything he did for the sport, what he meant to this city and this building,” Brown said. “And, as I say, it’s a small thing, but it’s our thing, and I’m thrilled we could show some level of consideration.”

Lakers: Host the Milwaukee Bucks on Friday night in a showdown of conference leaders.