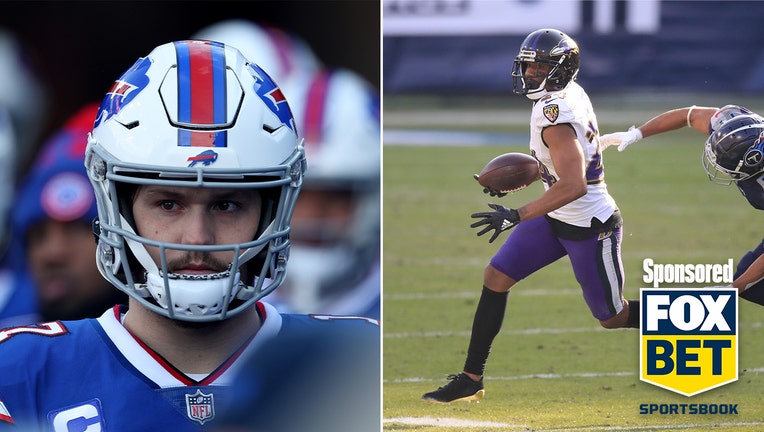 LEFT: Josh Allen #17 of the Buffalo Bills waits to take the field prior to an AFC Wild Card playoff game against the Indianapolis Colts at Bills Stadium on January 09, 2021 in Orchard Park, New York. (Photo by Bryan Bennett/Getty Images) RIGHT: Marcu

At this time of the year, any NFL Playoff matchup looks to have great appeal. But when the two hottest teams in football meet up in an NFL Playoff game with the right to advance to the conference championship game, that becomes an extra dash of intrigue.

The Buffalo Bills and Baltimore Ravens are exactly that right now- the combined winners of 13 straight games coming into the divisional round. Add that together with the possibility of a cold Saturday night (8:15 p.m., NBC) at Bills Stadium and you have a stirring AFC Divisional matchup that could be the best of a pretty loaded football weekend.

The Bills are coming off their first playoff win since 1995 – a 27-24 classic over Indianapolis that showed their toughness in big spots. The Ravens were able to stifle the Tennessee Titans in a 20-13 road win to advance forward as the No. 5 seed.

The Bills and Ravens are both 11-6 against the spread. Eleven of Buffalo’s 17 games have gone over the total points while Baltimore has 10 out of its 17 which have gone under.

This will be the first post-season game between the two franchises since the Ravens moved from Cleveland to Baltimore in 1996. Baltimore leads the overall series 6-3, which includes a 24-17 victory in Buffalo on Dec. 8, 2019. Lamar Jackson threw three touchdown passes in that game while Bills quarterback Josh Allen was sacked six times in the game.

The Ravens win over the Titans last week was significant for a number of reasons. Chief among them was to squelch all talk- legitimate or not- about whether Jackson’s style could translate to winning football in January.  Jackson was responsible for over 300 yards – 179 in the air, 136 and a touchdown on the ground- and constantly kept the Titans defense on roller skates in order to allow Baltimore to rally from an early 10-0 deficit. The other factor was the Ravens defense, which held rushing champion Derrick Henry to just 40 yards on 18 carries and forced a Ryan Tannehill interception to Marcus Peters at the two minute warning that sealed the game. One thing Baltimore will have to do is get more pressure on Allen than they did on Tannehill, who was sacked only once.

On Saturday, the Bills were able to overcome a Colts team which played an effective ball control game and didn’t turn the ball over. What Buffalo did get was a strong game from Allen, who protected the football, threw for 324 yards and two touchdowns and ran for 54 yards and another. The Bills will need to grind out a running game from those other than Allen – Zach Moss and Devin Singletary rushed 10 times for 41 yards- just to keep the Ravens defense honest.