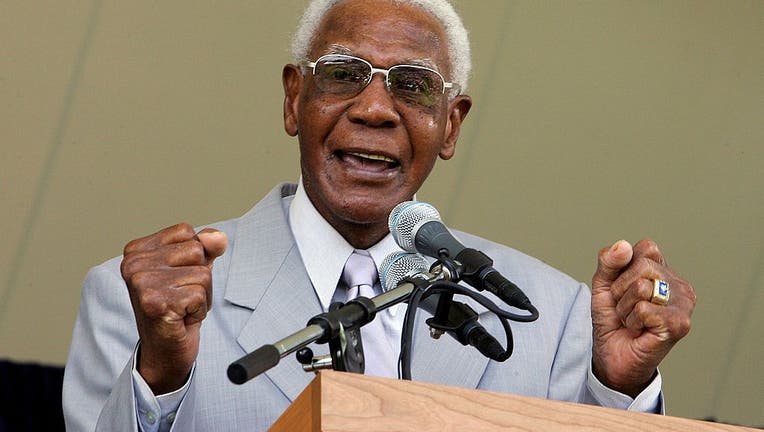 COOPERSTOWN, N.Y. - Buck O’Neil, a champion of Black ballplayers during a monumental, eight-decade career on and off the field, joined Gil Hodges, Minnie Miñoso and three others in being elected to the baseball Hall of Fame on Sunday.

Former Minnesota Twins teammates Tony Oliva and Jim Kaat also were chosen along with Bud Fowler by a pair of veterans committees.

Oliva and Kaat, both 83 years old, are the only living new members. Longtime slugger Dick Allen, who died last December, fell one vote shy of election.

The six newcomers will be enshrined in Cooperstown, New York, on July 24, 2022, along with any new members elected by the Baseball Writers’ Association of America. First-time candidates David Ortiz and Alex Rodriguez join Barry Bonds, Roger Clemens and Curt Schilling on the ballot, with voting results on Jan. 25.

Passed over in previous Hall elections, the new members reflect a diversity of accomplishments.

This was the first time O’Neil, Miñoso and Fowler had a chance to make the Hall under new rules honoring Negro League contributions. Last December, the statistics of some 3,400 players were added to Major League Baseball’s record books when MLB said it was "correcting a longtime oversight in the game’s history" and reclassifying the Negro Leagues as a major league.

MLB lockout: What it could mean for Spring Training in Arizona

The MLB has transitioned to a twilight zone with the lockout going into effect on Wednesday night. Last night, the MLB officially locked out the players for the first time since 1990 after an agreement could not be made on a new collective bargaining agreement (CBA). A quick scan of the MLB’s official website, MLB.com, sees a complete wipeout of any articles, photos or mentions of current players. They’ve been replaced with videos and statements from MLB commissioner Rob Manfred and tons of coverage of ongoing Hall of Fame voting.

O’Neil was a two-time All-Star first baseman in the Negro Leagues and the first Black coach in the National or American leagues. He became a remarkable ambassador for the sport until his death in 2006 at 94 and already is honored with a life-sized statue inside the Hall of Fame in Cooperstown.

For all O’Neil did for the game his entire life, many casual fans weren’t entirely familiar with him until they watched the nine-part Ken Burns documentary "Baseball," which first aired on PBS in 1994.

There, O’Neil’s grace, wit and vivid storytelling brought back to life the times of Negro Leagues stars Satchel Paige, Josh Gibson and Cool Papa Bell, plus the days of many more Black ballplayers whose names were long forgotten.

Kendrick said it was too bad O’Neil won’t be in Cooperstown for the induction ceremonies next July 22, "but you know his spirit is going to fill the valley," he said on MLB Network.

Miñoso was a two-time All-Star in the Negro Leagues before becoming the first Black player for the Chicago White Sox in 1951. Born in Havana, "The Cuban Comet" was seven-time All-Star while with the White Sox and Indians.

There was nothing mini about Saturnino Orestes Armas Miñoso on the field. He hit over .300 eight times with Cleveland and Chicago, led the AL in stolen bases three times, reached double digits in home runs most every season and won three Gold Gloves in left field.

The White Sox retired his No. 9 in 1983 and he remained close to the organization and its players before his death in 2015.

An eight-time All-Star and three-time Gold Glover at first base, Hodges enhanced his legacy when he managed the 1969 "Miracle Mets" to the World Series championship, a startling five-game win over heavily favored Baltimore.

Hodges was still the Mets’ manager when he suffered a heart attack during spring training in 1972 and died at 47.

Oliva was a three-time AL batting champion with the Twins whose career was cut short by knee problems. Kaat was 283-237 in 25 seasons and a 16-time Gold Glove winner.

O’Neil and Fowler were selected by the Early Days committee. Hodges, Miñoso, Oliva and Kaat were chosen the by the Golden Days committees.

The 16-member panels met separately in Orlando, Florida. The election announcement was originally scheduled to coincide with the big league winter meetings, which were nixed because of the MLB lockout.

O’Neil played 10 years in the Negro Leagues and helped the Kansas City Monarchs win championships as a player and manager. His numbers were hardly gaudy -- a .258 career batting average, nine home runs.

But what John Jordan O’Neil Jr. meant to baseball can never be measured by numbers alone.

O’Neil became the first Black coach in American League or National League history with the Chicago Cubs and enjoyed a prolific career as a scout.

His impact is visible to this day.

Along with his statue in Cooperstown, the Hall's board of directors periodically present the Buck O’Neil Lifetime Achievement Award to a person whose "whose extraordinary efforts enhanced baseball’s positive impact on society ... and whose character, integrity and dignity" mirror those shown by O’Neil.

In 2006, it appeared O’Neil would get to soak in the praise earned for his work when the Special Committee on Negro Leagues convened to study candidates for the Hall of Fame. The panel indeed elected 17 new members but O’Neil was not among them, narrowly missing out.

O’Neil was chosen to speak on behalf of those 17 newcomers, all deceased, on induction day at Cooperstown. True to his nature, he didn’t emit a single word of remorse and regret about his own fate of being left out.