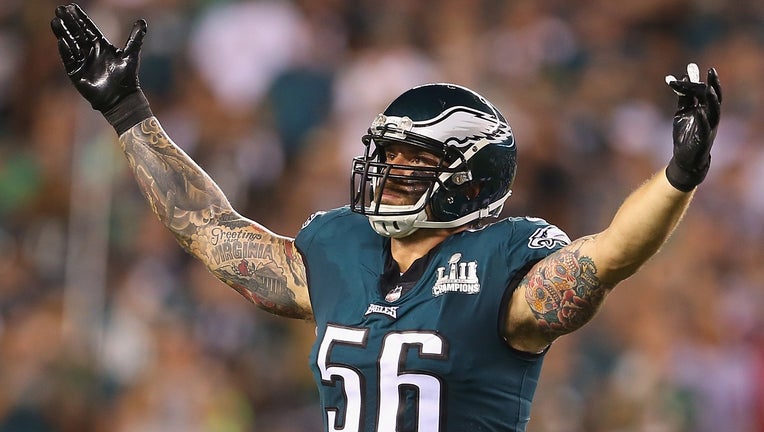 Chris Long #56 of the Philadelphia Eagles pumps up the crowd during the first half against the Atlanta Falcons at Lincoln Financial Field on September 6, 2018 in Philadelphia, Pennsylvania. (Photo by Mitchell Leff/Getty Images)

PHILADELPHIA (FOX 29) - Days after announcing his retirement on social media, former Eagles defensive end Chris Long is opening up about his career and the time he spent in Philadelphia.

In ProFootball Talk’s “Football Morning in America,” Long reflected on some key points and accomplishments in his 11 year NFL career.

The former second overall pick talked about the lessons he learned during his first several seasons with the then St. Louis Rams.

“Anyone playing in that era in St. Louis knows how bad it was at times. It was carnage, in so many ways. It was a test of my will,” Long wrote.

Long then turned his attention to the different kind of lessons he learned in his single, Super Bowl winning season with the New England Patriots.

“In New England, I learned so much about football. I always thought I was a smart player, even though I never thought about anything but the six inches in front of my face. In New England, I was forced to learn so many schematic concepts,” he wrote.

Then, Chris turned his attention to the City of Brotherly Love, where he played his final two seasons with the Eagles, and helped bring home the first Super Bowl in franchise history.

“Going to Philadelphia, I felt I found a home. Best sports city in America,” he wrote.

Off the field, Long says he felt time in Philadelphia proved that players could win on the field and make an impact in the community. He pointed to a morning where he, Malcolm Jenkins, and former Eagle Torrey Smith woke up early after a Monday Night Football victory and went to Harrisburg to work with state legislators.

“It just showed how much we could make changes in things that matter, and play really good football too. You can be a football player and a citizen,” he explained.

The reigning Walter Payton NFL Man of the Year wrote the he was excited for the next phase of his life. In addition to continuing his work with Waterboys, an organization bringing clean water to different parts of Africa, Long will be launching a digital media company as well as a podcast of his own.

You can read more about Long’s decision to retire and his reflections on his career, here.