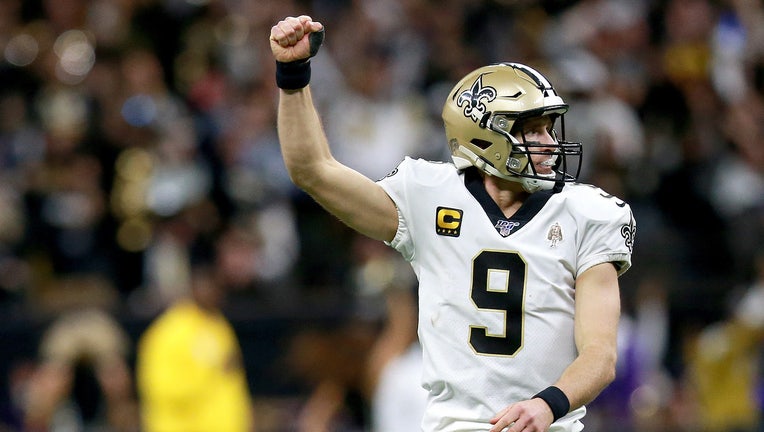 Drew Brees #9 of the New Orleans Saints celebrates after a play against the Minnesota Vikings in the NFC Wild Card Playoff game at Mercedes Benz Superdome on January 05, 2020 in New Orleans, Louisiana. (Photo by Sean Gardner/Getty Images)

NEW ORLEANS - New Orleans Saints quarterback Drew Brees announced Thursday that he and his wife Brittany are donating $5 million to the state of Louisiana in 2020 amid the coronavirus pandemic.

“The priority now is helping our communities get through this tough time,” the NFL legend wrote on Instagram.

According to the post, the Brees family will be working with a handful of organizations and companies to provide 10,000 meals per day to children, families and seniors in need “for as long as it takes.”

“Let’s all do our part, maintain hope and get through this together,” Brees added.

Louisiana Gov. John Bel Edwards, who earlier this week requested and received a major disaster declaration for his state from President Trump, thanked Brees on Twitter.

“We are all grateful for your family’s support and generosity through this trying time,” the governor wrote. “We are one Louisiana and we will get through this, together.”

In his letter to Trump, Edwards included a chart that showed Louisiana had surpassed New York -- by far the hardest-hit state during the outbreak -- in terms of the growth in new coronavirus cases.

Brees, who joined the Saints in 2006, was later named Sports Illustrated Sportsman of the Year in 2010 for his work supporting New Orleans in the aftermath of Hurricane Katrina, Fox Sports reported. He also received the Walter Payton NFL Man of the Year award for charity work in 2006.

The Super Bowl winner reaffirmed his interest in re-signing with the Saints earlier this month when he declared, “I am Who Dat Nation for life.”

The 41-year-old later agreed to a two-year, $50 million deal to remain with the team, Fox News has reported.

The announcement followed news this week that Saints head coach Sean Payton, who had contracted the coronavirus, was "cleared" this week and doing well.