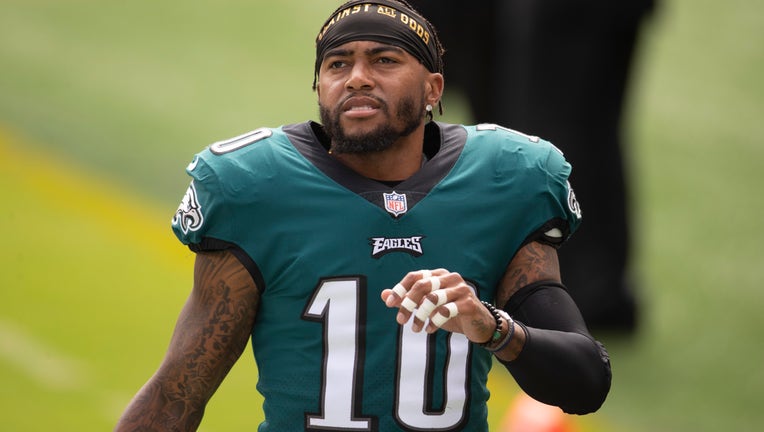 DeSean Jackson #10 of the Philadelphia Eagles looks on prior to the game against the Cincinnati Bengals at Lincoln Financial Field on September 27, 2020 in Philadelphia, Pennsylvania. (Photo by Mitchell Leff/Getty Images)

PHILADELPHIA - The Philadelphia Eagles could see a handful of starters return to their lineup Thursday night against the rival New York Giants as they recover from injuries.

Doug Pederson gave a brief update during a Wednesday morning press conference, where he announced he "anticipates" wide receiver DeSean Jackson and tackle Lane Johnson could return to action Thursday.

Jackson has been out since suffering a hamstring injury against the Bengals, and Johnson has been in an out of the lineup with an ankle injury.

Johnson's potential return is particularly promising for an Eagles offensive line that has been decimated by injuries. Without Johnson, the Eagles would have been down to their third-string right and left tackles with backup right tackle Jack Driscoll sidelined with an injury of his own.

Pederson declined to answer questions about who else would be starting on the offensive line after right guard Matt Pryor missed Sunday's game against the Baltimore Ravens after he was placed on the team's COVID-19/reserve list. Free-agent signing Jamon Brown got the start in his place, but was released by the team Wednesday afternoon.

Jackson would be a welcome return to an Eagles receiving corps that has also dealt with injuries of their own. Alshon Jeffrey is not expected to make his 2020 debut Thursday as he continues to work his way back from a foot injury.

The offense could use all the help they can get with injuries reportedly sidelining running back Miles Sanders and tight end Zach Ertz.

SPONSORED CONTENT: What to watch for Eagles, Giants meet with NFC East balance hanging on the line

On the defensive side of the ball, cornerback Avonte Maddox could also return to his spot opposite Darius Slay Jr. after he suffered an ankle injury earlier in the season.

Defensive tackle Malik Jackson is expected to be ruled out Thursday with a quadriceps injury. It is not yet clear if linebacker Duke Riley could get the green light to play Thursday as he recovers from a rib injury.

Advertising: Enter the NFL Challenge contest on the FOX Super 6 app for free and you can win the $1M jackpot! Download now!