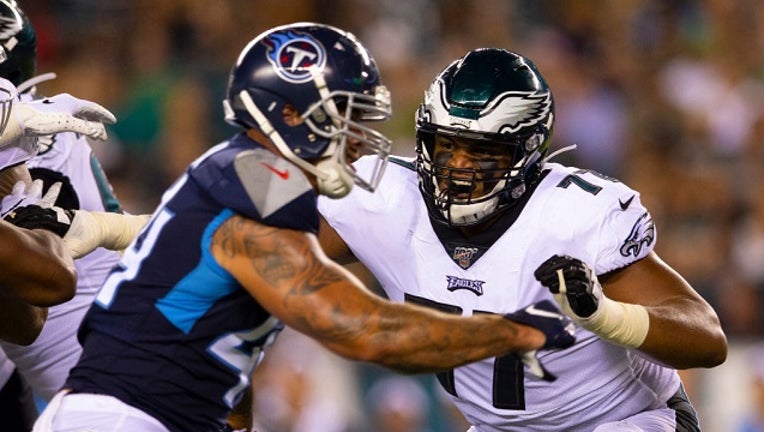 Andre Dillard #77 of the Philadelphia Eagles blocks Kamalei Correa #44 of the Tennessee Titans in the second quarter of the preseason game at Lincoln Financial Field on August 8, 2019 in Philadelphia, Pennsylvania. (Photo by Mitchell Leff/Getty Image

PHILADELPHIA - The Philadelphia Eagles rested Carson Wentz only to lose his backup.

Nate Sudfeld left the sideline on a cart after injuring his left arm on a late hit in the second quarter of Philadelphia's 27-10 loss to the Tennessee Titans on Thursday night.

Sudfeld fell backward after a personal foul by Isaiah Mack and immediately went to the sideline. He was wearing an air cast on the cart ride to the locker room. There was no immediate word on the extent of his injury.

Cody Kessler, 2-10 as a starter in three seasons with the Browns and Jaguars, replaced Sudfeld and took a late hit from Nigel Harris on his first play.

Tannehill is adjusting to a backup role for the first time in his eight-year career. He started every game he was healthy to play - a total of 88 - with the Dolphins and didn't miss a game from 2012-15.

Tannehill had a 1-yard TD pass to MyCole Pruitt and a 23-yarder to Anthony Firkser. Woodside hit Cody Hollister on a 25-yard score and Tanner McEvoy on a 17-yard scoring strike.

Titans new offensive coordinator Arthur Smith got his first chance to call plays in a game at any level. He was planning to sit upstairs in the coach's box but ended up on the sideline because of issues with headsets. Smith was promoted from tight ends coach to coordinator when Matt LaFleur took the head coaching job with Green Bay.

Eagles: at Jacksonville next Thursday night.