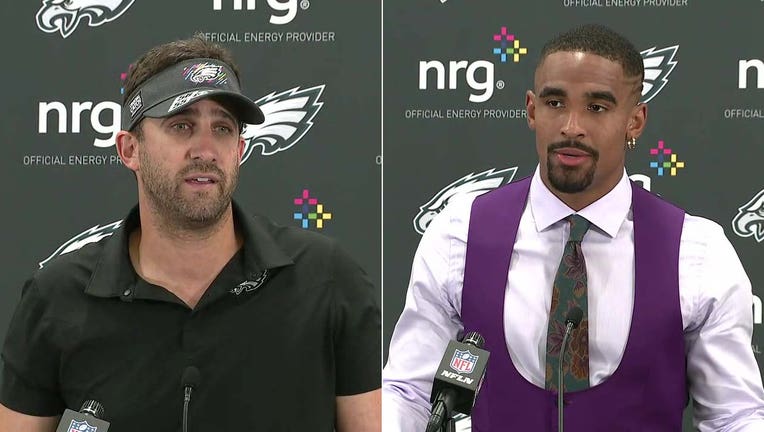 PHILADELPHIA - When the offense was ineffective for much of the game, defense and special teams bailed out the Philadelphia Eagles.

That’s encouraging for an inconsistent team with a rookie head coach learning on the job.

The Eagles (2-3) moved the ball well and scored some points the previous two games, but the defense couldn’t stop Dallas and Kansas City. Jalen Hurts and the rest of the offense struggled for most of three quarters against Carolina on Sunday, then took advantage of three turnovers and a blocked punt to earn a 21-18 comeback win.

"It was perseverance and his ability to just forget what happened in the first half because everything that we wanted out of that game, which is obviously to win the game, was right there in front of us," coach Nick Sirianni said about Hurts on Monday.

"He took advantage of it and played a really good game in the second half. You’re just going to want some throws back, some reads back, and that kind of even extended into the third quarter a little bit for all of us, not just Jalen but the entire offensive unit and coaching staff.

Hurts’ stats were ugly — 22 of 37 for 198 yards and one interception — but he used his legs to be a difference maker. Hurts ran for 30 yards and two scores and escaped pressure to complete a 2-point conversion.

His ability to bounce back after a poor first half showed his resilience. The second-year pro has only started nine games. He’s looked impressive at times and struggled at points. He’s growing, maturing, still learning. Just like his coach.

Throwing the ball to DeVonta Smith has been productive for Hurts. The first-round draft pick has 14 catches for 199 yards in the past two games. Smith also had a TD catch negated because he stepped out of bounds before returning in play.

The offense lacks balance. Running backs Miles Sanders and Kenneth Gainwell have only 69 carries in five games. The duo has run the ball on just 22.5% of Philadelphia’s offensive plays. Hurts has 43 rushes himself. Some are scrambles but many are designed runs or run-pass options.

Cornerback Darius Slay had two picks against the Panthers after only intercepting one pass in his first 19 games with the Eagles. Slay has been solid in coverage since joining the team.

Linebacker Eric Wilson saw his snap count drop to 29 as second-year pro Davion Taylor played 24 snaps. Wilson had one tackle and continues to struggle against the run and pass.

Right tackle Lane Johnson remains out because of a personal issue. Sirianni said he’s "hopeful" Johnson returns this season. ... LG Landon Dickerson didn’t finish the game because of an ankle injury but isn’t expected to miss a game. ... DE Derek Barnett has an ankle injury and didn’t practice Monday.