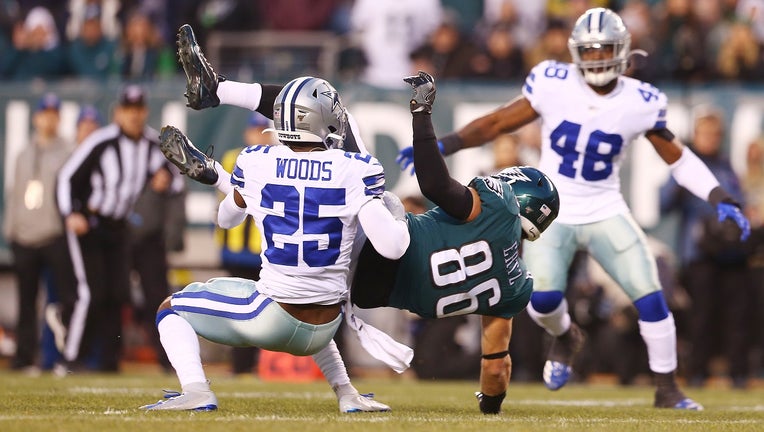 Zach Ertz is unable to catch a pass against Xavier Woods during the first quarter. (Photo by Mitchell Leff/Getty Images)

PHILADELPHIA - Philadelphia Eagles tight end Zach Ertz reportedly suffered a broken rib as a result of a hit in Sunday's matchup against the Dallas Cowboys.

"How tough is Eagles TE Zach Ertz?" NFL insider Ian Rapoport tweeted. "He suffered a fractured rib last night and somehow played and helped put Philly on the doorstep of the playoffs."

The hit by Xavier Woods occurred in the first quarter, leaving Ertz listed as questionable to return after a visit to the locker room.

Philadelphia's leading receiver instead got wrapped and returned to the lineup for the final drive of the first half.

At a press conference Monday, coach Doug Pederson confirmed Ertz has an "affected" rib, but that he is going through additional testing before Pederson gives a final update.

The Eagles ultimately denied the Cowboys an NFC East title, winning the matchup 17-9.