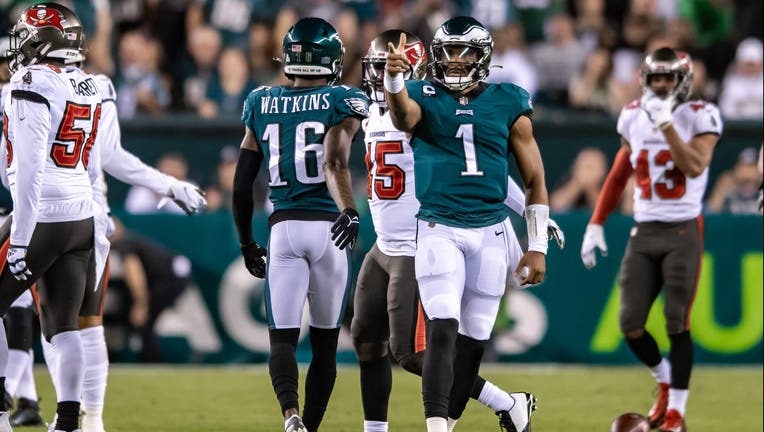 PHILADELPHIA - The Philadelphia Eagles will be taking their Super Bowl aspirations to Tampa, Florida to take on the defending champion Buccaneers on Sunday.

The Eagles and Bucs will face off at 1 p.m. Sunday on FOX, according to a schedule released by the NFL on Sunday night.

Jalen Hurts and the league's top rushing offense will be getting their second shot at Tom Brady and the Buccaneers this season. The Buccaneers won the Oct. 14 meeting 28-22 in Philadelphia.

If there's one advantage the underdog Eagles have next week, it's health. Nick Sirianni opted to rest most of his team's starters in their season finale against the Dallas Cowboys.

The Buccaneers have been without some key contributors during their season finale on Sunday, including RB Ronald Jones (ankle), OLB Jason Pierre-Paul (shoulder,) and CB Richard Sherman (Achilles).

The Super Bowl champs also were without LB Shaquil Barrett, LB Lavonte David, and RB Leonard Fournette, who are recovering from injuries not expected to keep them sidelined during the playoffs. WR Chris Godwin also suffered a season-ending injury last month, and the team cut WR Antonio Brown this past week.