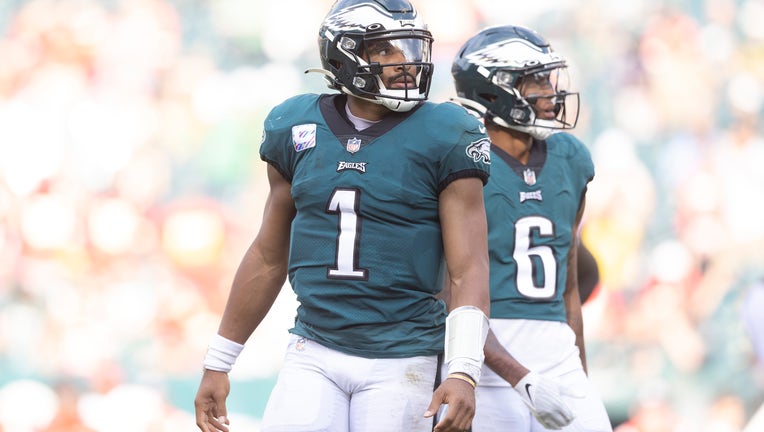 PHILADELPHIA, PA - OCTOBER 03: Jalen Hurts #1 and DeVonta Smith #6 of the Philadelphia Eagles look on against the Kansas City Chiefs at Lincoln Financial Field on October 3, 2021 in Philadelphia, Pennsylvania. (Photo by Mitchell Leff/Getty Images)

PHILADELPHIA - The Philadelphia Eagles will be starting their season on the road before welcoming fans back to Lincoln Financial Field for a Monday night matchup in week two.

The NFL revealed Monday morning that the Eagles would be part of a Week 2 prime-time doubleheader on Monday, Sept. 19. The Birds will take on the Vikings at 8:30 p.m. on ABC as part of the doubleheader that also includes the Tennessee Titans heading to Buffalo to take on the Bills at 7:15 p.m.

The NFL will announce the full 2022 schedule on Thursday.

The Eagles will look a little different wherever they take the field in Week 1 with the additions of wide receiver A.J. Brown and rookie defensive tackle Jordan Davis. Otherwise, Jalen Hurts is slotted to return as the team’s starting quarterback and will be surrounded with familiar faces like Miles Sanders, DeVonta Smith, and Dallas Goedert.

The 2022 regular-season schedule will be announced Thursday at 8 p.m.