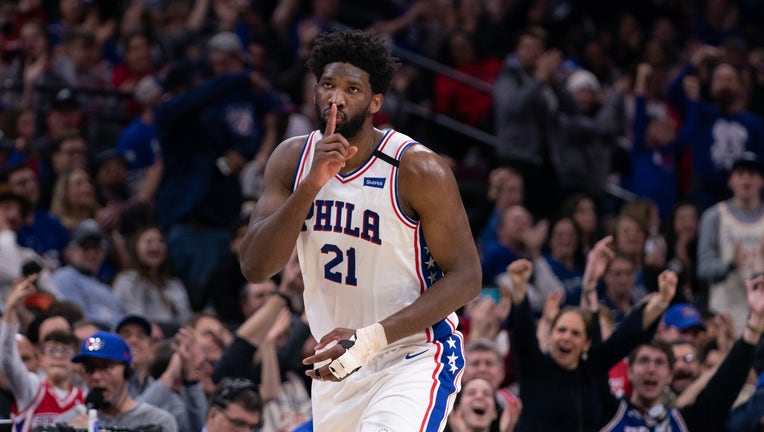 Joel Embiid #21 of the Philadelphia 76ers reacts against the Chicago Bulls in the fourth quarter at the Wells Fargo Center on February 9, 2020 in Philadelphia, Pennsylvania. The 76ers defeated the Bulls 118-111. (Photo by Mitchell Leff/Getty Images)

PHILADELPHIA - Philadelphia 76ers fans were put through a stressful night Monday despite the team having the night off.

All-Star center Joel Embiid caused quite a stir on social media with a cryptic post before later clarifying his intentions with a second post.

During a Sunday night matchup with the Chicago Bulls in Philadelphia, Embiid put his index finger to his mouth seemingly “shushing” the home crowd after draining a late three-pointer to seal a Sixers victory.

After the game, reporters asked Embiid if the gesture was a response to Philadelphia fans who booed the team when they gave up their lead in the third quarter.

Embiid took to Instagram Monday, posting a photo of himself making the gesture with the caption:

"You either die a hero or live long enough to see yourself become the villain.” #TheProcess.

Initially, 76ers fans appeared to take solace in the fact that their big man had used “All Love” as the location on the post.

Any sense of security was quickly wiped away when former 76er Jimmy Butler got involved in the comments of the post.

“I know a place where villains are welcome,” Butler wrote, apparently hinting at his new home with the Miami Heat.

The true impact of Embiid’s posts and comments may be clarified when he and the Sixers take on a strong Los Angeles Clippers team at the Wells Fargo Center Tuesday night.