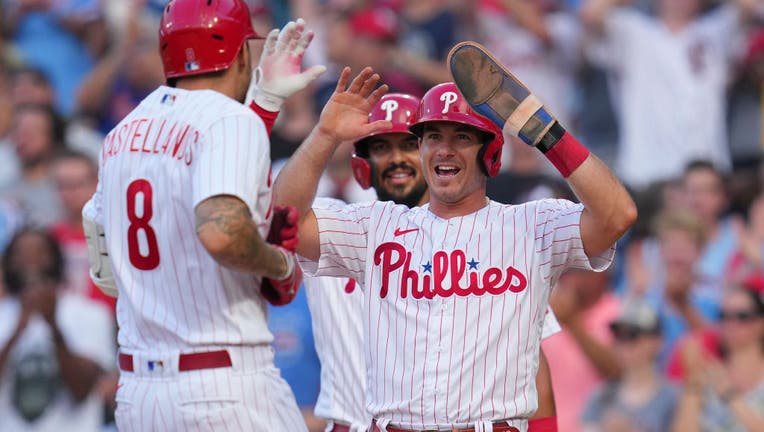 Rhys Hoskins, J.T. Realmuto, Nick Castellanos and Darick Hall also homered for the Phillies, who have won eight of nine to solidify their standing in the race for the NL's third and final wild-card position. The victory moved Philadelphia 10 games over .500 for the first time since they were 37-27 on June 8, 2019.

Gibson forced 12 groundball outs, including a sparkling backhand defensive play by third baseman Alec Bohm on a hard-hit ball by Ildemaro Vargas to end the sixth.

Washington’s Victor Robles broke up the perfect game by getting plunked with a fastball in his left forearm to begin the seventh inning. The next batter, Luis Garcia, ended Gibson’s no-hit bid with a clean single into left field over the glove of Bohm.

The Nationals/Expos franchise has not been no-hit since David Cone's perfect game against Montreal on July 18, 1999.

Gibson surrendered his only run in the eighth, when Vargas lifted a sacrifice fly to center, scoring Lane Thomas. Garcia scored Washington's second run in the ninth off reliever Brad Hand.

All of the offense that Gibson needed came in the first inning when Philadelphia jumped on starter Josiah Gray.

Hoskins hit a solo shot to right for his 22nd homer to start the scoring. Two hitters later, Castellanos crushed an inside fastball to deep left field for his 10th, making it 3-0. Hall immediately followed with his sixth homer since being called up from Triple A Lehigh Valley on June 29.

Realmuto — who fell a double short of the cycle — lifted a high-arcing homer that sneaked over the left-field wall for a two-run homer in the third.

Schwarber closed out the Philadelphia scoring in the seventh with a rocket that hit the steps inside the home bullpen in deep right-center.

Nationals: RHP Tyler Clippard threw a scoreless inning during a rehab assignment for Triple-A Rochester on Friday night. Clippard got two groundouts and one fly out in 11 pitches for the Red Wings. Clippard has been on the 15-day injured list since July 19 with a groin strain.

The Phillies and Nationals meet Saturday in the third game of their four-game set. Washington will send LHP Patrick Corbin (4-15, 6.57 ERA) to the mound against Phillies LHP Ranger Suarez (7-5, 3.60).