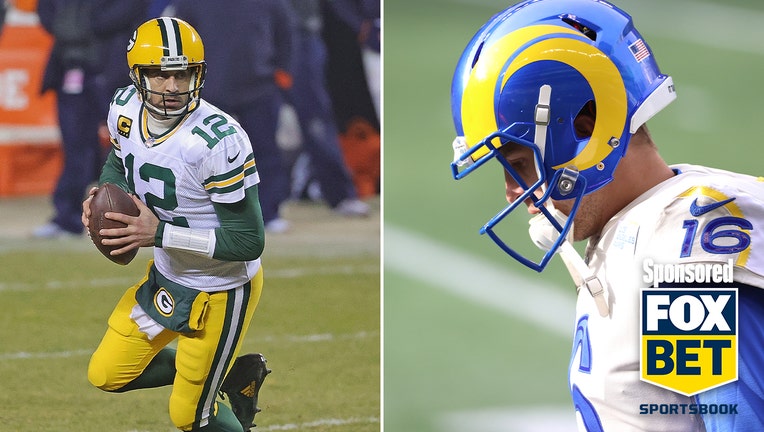 LEFT: Aaron Rodgers #12 of the Green Bay Packers rolls out to look for a receiver against the Chicago Bears at Soldier Field on January 03, 2021 in Chicago, Illinois. The Packers defeated the Bears 35-16. (Photo by Jonathan Daniel/Getty Images) RIGHT

The first thing you do as a visiting team from a warmer climate when you have a date at Lambeau Field in January is take a look at the five day forecast.

And while the forecast of a 31 degree and dry day in Wisconsin on Jan. 16 sounds downright balmy, the Los Angeles Rams – filled with a bunch of dings and nicks after a brutal trenches game against the Seattle Seahawks last week- must be cringing at the thought of the Frozen Tundra combined with having to stop the Green Bay Packers and Aaron Rodgers on his home turf on Saturday (4:30 p.m., FOX).

The Packers are trying to advance to the NFC Championship game for the second season in a row and the fifth time since Rodgers replaced Brett Favre as Packers quarterback in 2008. The Rams are seeking a second trip in three years, but will have to fight through a series of injuries to key players Aaron Donald, Cooper Kupp and Jared Goff- all of whom are listed as questionable due to lingering injuries.

The Packers are 10-6 against the spread while the Rams are 10-7 – including last week’s win as an underdog at Seattle.

At home, the Packers are 19-5 at Lambeau and have won the last four playoff games at home. The Rams have won both true road playoff games during Sean McVey’s time as Los Angeles’ head coach.

Green Bay’s path to the top seed in the NFC tournament and the only bye was built off a late season surge that saw the Packers win eight of its final nine and six straight games. Mainly, it was Rodgers and the offense, who averaged 32.2 points a game. Rodgers hasn’t thrown for more than 300 yards in the six game winning streak, but that has been buoyed by an increase in the total running attack – Aaron Jones has been more effective- and the fact that the Packers have turned the ball over only twice in those six games.

The Rams 30-20 win over the Seahawks last week was a product of a suffocating defense that held Seattle to 278 yards and forced two turnovers – including Darious Williams 42 yard interception return for a touchdown. Goff did come off the bench after John Wolford’s stinger with the bad thumb, throwing for 155 yards and a touchdown. Cam Akers carried the main offensive load, however, with 28 rushes for 131 yards and a touchdown. Still, the chances of an upset may come down to the health of Kupp, who left early with bursitis in his knee, and Donald, who suffered a rib injury when Russell Wilson fell on top of him. Right now, McVay hasn’t committed to either Goff or Wolford as starting quarterback.