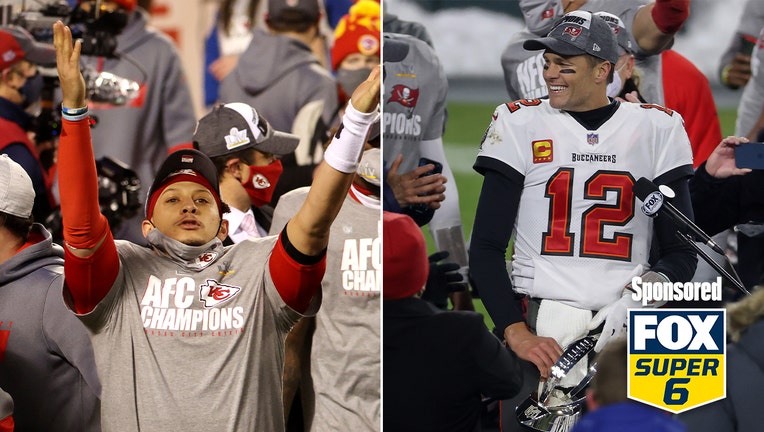 The biggest sports gambling day of the year is Super Bowl Sunday, and as a result, you get the most efficient point spread of any game all season.

As painful as this will be to hear, there’s no edge betting a side (KC -3) in the Super Bowl. You can say the same for the point total (56.5). The sportsbooks basically copied the spread and total for the November meeting between the two teams (-3, 56), and the line has barely moved since they were hung.

The Super Bowl market is the equivalent of Obi-Wan Kenobi rolling into the Mos Eisley Cantina, but when he is stopped by stormtroopers, he hypnotizes them and says, "These aren’t the droids you’re looking for."

This is why I hammer prop bets more than the side or total. In-game wagering will be huge, too.

For instance, when Andy Reid and Patrick Mahomes fall behind, there is a ton of value on them rallying to win and cover. In last year’s playoffs, the Chiefs trailed by double digits in all three games but pulled off a comeback each time. In the 2020 AFC title game against Buffalo, they trailed 9-0 but stormed back to win and cover.

If Tampa Bay jumps to a 7-0 or 10-0 lead, it’s an auto-bet for me on the Chiefs — and at a much better number than -3. This seems like a good time to remind you that Mahomes has never lost a game by more than one score in his three seasons as an NFL starter (he lost 40-32 to Las Vegas).

With that, we'll finish the season strong with one last game.

But first, let's see how we did this season:

Now on to the Super Bowl:

I wrote about why I bet the Chiefs as soon as the line came out two weeks ago. I’m contractually obligated to mention that Andy Reid is 26-6 straight-up off a bye week, and that's 7-3 straight-up in the playoffs.

Some other fun facts:

The Chiefs' defense features two big names that everyone knows: All-Pro defensive tackle Chris Jones and star safety Tyrann "Honey Badger" Mathieu. But the guy in line for a big game defensively is the versatile safety Daniel Sorenson, whom the Chiefs line up all over the field.

Sorenson played 460 snaps in the box, 216 at free safety and 157 at slot cornerback. He led the Chiefs in tackles this season, and he has had at least six tackles in each of his past six playoff games.

One more thing to remember: Tom Brady loves to matchup-hunt. Think back to how he picked on Green Bay’s Kevin King repeatedly in the NFC title game. If Sorenson finds himself matched up with Chris Godwin in the slot, expect Brady to go after him. Also, Brady has two tight ends who are 6-foot-5 (Cameron Brate) and 6-foot-6 (Rob Gronkowski), and they have a big size advantage on the 6-foot-2 Sorenson.

That just means more opportunities for tackles for Sorenson.

The Honey Badger is the ball-hawking playmaker. Sorenson is the tackling machine.

This is a game script play. I believe the Chiefs will at times blitz Brady similarly to the way they relentlessly blitzed Josh Allen in the AFC title game. Brady, a statue in the pocket, won’t have many options to reach his downfield targets, the same way Allen didn’t.

In addition, the Chiefs' linebackers are not great in coverage, and that’s why the Bills targeted running backs TJ Yeldon and Devin Singletary a combined eight times. Bruce Arians and Brady seem to trust Fournette more than Ronald Jones, who, to be fair, is coming off an injury.

Fournette’s targets have gone up in each playoff game (4, 5, 7), and he has better hands than Jones, too.

By now, everyone knows the story of Tom Brady in the big game: In nine Super Bowls, Brady’s offenses have never generated a touchdown in the first quarter. In fact, his teams have scored just one field goal in the nine quarters, and that came against the Eagles in 2018.

Slow starts are a real thing. This season, both the Bucs and Chiefs have struggled in the red zone – sounds weird to say out loud, given the two QBs we’re talking about – ranking 11th and 12th, respectively, in red-zone TD percentage. The Bucs converted TDs 64% of the time and the Chiefs just 61%.

In two playoff games, the Chiefs held the Browns and Bills to a combined one TD and two field goals in the first half. Bruce Arians is Mr. "No risk it, no biscuit," but he’ll save that for the second half.

Any field goal or extra point attempt to hit the upright or crossbar: YES (+425)

The most popular Super Bowl prop is almost always the coin toss bet, but I’ve never gotten into that.

Whether a kick will hit the upright or crossbar? Now that’s fun.

That makes every single kick a must-see event. There’s no research that can be done here. Don’t bother diving into the history of kicks that have hit the upright or crossbar at Raymond James Stadium. If you want to put some pizza money on the YES, you get to root for a "doink" every time a kicking unit trots onto the field.

This is another anti-narrative play. "You can’t run on Tampa, and now Vita Vea is back!"

The Bucs' run defense has been terrific all season (first in efficiency), and the longest run they’ve permitted in the postseason is 17 yards. And everyone’s going to bet Mahomes to pass for a million yards.

Here’s the funny part: All of that is true and can certainly happen. In fact, it has all happened before, and running back props have still hit. In the Super Bowl last year, the Chiefs trailed for much of the second half, Mahomes attempted 42 passes … and Damien Williams still rushed for 104 yards. Even if you take away his 38-yard TD run late in the game, he still easily cleared his prop total (52).

In the earlier meeting with Tampa Bay this year, Mahomes attempted 49 passes, and rookie Clyde Edwards-Helaire rushed for 37 yards. With CEH nursing a sprained ankle that limited him to six carries for seven yards in the AFC title game, Darrel Williams will get the bulk of the carries.

This is simply a play against the beat-up Chiefs offensive line. Their two best tackles are out, and it’ll be musical chairs of offensive linemen.

That plan didn’t work out so well for Green Bay, as backup left tackle Billy Turner gave up two sacks to Jason Pierre-Paul in the first half of the NFC Championship. JPP had gone five straight games with no sacks.

Speculation is that K.C. will move undrafted veteran Mike Remmers to left tackle to face JPP. This is Remmers' first season with K.C., and he has played 839 snaps and graded out well, according to Pro Football Focus (36th out of 80 tackles).

Shaq Barrett has become one of the best edge rushers in the league the past two seasons, and he has an extremely favorable matchup against K.C. guard Andrew Wylie, who is likely to move to right tackle for this game.

Wylie has had a below-average season, according to Pro Football Focus (61st out of 80 guards), and now he must move to the outside, where he might find himself one-on-one with Barrett. In the NFC title game, Barrett abused Green Bay right tackle Rick Wagner, racking up three sacks and four QB hits.

Barrett had two QB hits on Mahomes and one sack in the regular-season meeting.

Brady has played 19 games this season, and for some reason, he has thrown interceptions in bunches, registering five games with multiple picks.

How strange is that? He had a total of five such games in his final three seasons with the New England Patriots.

Some of this can be chalked up to a new offense, new teammates and a new playbook. The only potential monkey wrench in this wager is that Mahomes has played seven postseason games and thrown only two interceptions. Both came against the San Francisco 49ers in the Super Bowl last year.

Do we know how healthy Antonio Brown is? If he’s unable to play or contribute much, it opens the door for Scotty Miller to slide in and potentially have a big moment.

It’s weird to think of the 5-foot-9, 174-pound Scott Miller as a big-play receiver, but Brady loves to target him deep. Miller hauled in a 39-yard bomb against the Packers at the end of the first half in the NFC title game. He caught Brady’s longest pass against New Orleans, too. Going back to the regular season, Miller snuck behind the Vikings' defense for the longest catch of that game (48-yard TD).

Miller also had the team's longest reception against the Las Vegas Raiders (35 yards), against the Denver Broncos (47) and in the opener against the Saints (35).

Of course, the catch here is that the Bucs' defense can’t give up anything deep to Tyreek Hill, Sammy Watkins or Mecole Hardman.