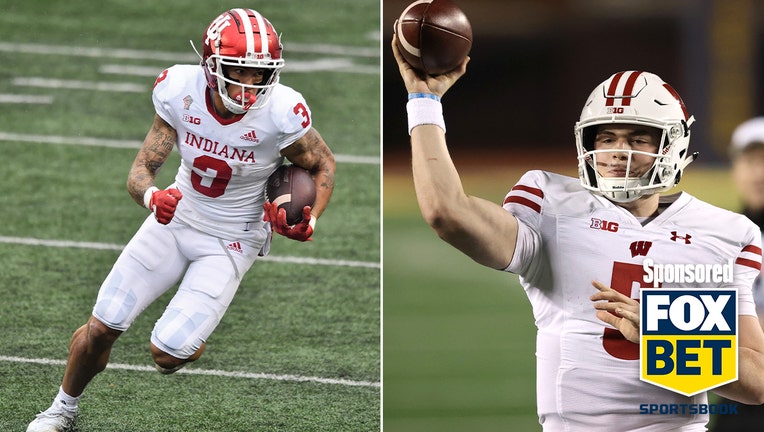 LEFT: Ty Fryfogle #3 of the Indiana Hoosiers carries the ball against the Ohio State Buckeyes at Ohio Stadium on November 21, 2020 in Columbus, Ohio. (Photo by Jamie Sabau/Getty Images) RIGHT: Graham Mertz #5 of the Wisconsin Badgers throws a first h

Cinderella in this weird college football season of 2020 has been the school where hoops have long reigned supreme.

What Indiana has been able to accomplish this season under Tom Allen has been nothing short of remarkable. A Top 10 ranking. Wins over Michigan, Michigan State and Penn State. A noble battle in Columbus that made Ohio State sweat.

But what the Hoosiers do from this point out could end up adding to the legacy. Indiana lost its best player, quarterback Michael Penix Jr., to a torn ACL. And now, it has to travel to Madison on Saturday (3:30 p.m., ABC) to face Wisconsin in a game that will tell a lot about the status of the Hoosiers as a possible candidate for a New Year’s Six bowl.

For the Badgers, this could be the last chance to make a big impression. Wisconsin (2-1) is not eligible for the Big Ten championship game because they will only play five regular season games, so they have to make the most of showings against Indiana and Iowa to get any attention from the College Football Playoff committee towards a potential New Year’s Six bowl.

The sports betting information
On FOXBet.com Sportsbook, the game is officially listed off the board due to the Penix injury and possible COVID situation involving the Badgers. No money line had been listed as of Tuesday night, so make sure you check in with FOXBet.com for the latest lines.

The storylines to watch
The loss of Penix is a crushing blow for the Hoosiers. He had passed for 14 touchdowns and only threw four interceptions. He had found a huge target in wide receiver Ty Fryfogel, who had back to back 200 yard games against Ohio State and Michigan State. (Fryfogel was held in check against Maryland last week during a 27-11 win in Bloomington.) More of the pressure is likely to fall on Stevie Scott III, who has 8 rushing touchdowns this season.

The biggest challenge, however, is making a dent against a Wisconsin defense that has been stingy through its first three games. Wisconsin has allowed only 11.7 points a game. The defense held Northwestern to just 17 points and 263 yards in the loss two weeks ago. However, it was turnovers that killed the Badgers, who committed five of them to usurp any momentum they had gained from a nearly 2-to-1 time of possession advantage. Quarterback Graham Mertz threw three interceptions that were just crushers. Wisconsin needs to hold onto the football against the depleted Hoosiers. If they do, they should be able to regain some momentum.