PHILADELPHIA - The Philadelphia Eagles have released a statement expressing 'disappointment' following outrage over social media posts shared by wide receiver DeSean Jackson over the weekend. Jackson has also issued an apology and removed the some of posts from his Instagram page.

The team says they have spoken with Jackson about the posts and "are continuing to evaluate the circumstances and will take appropriate action." 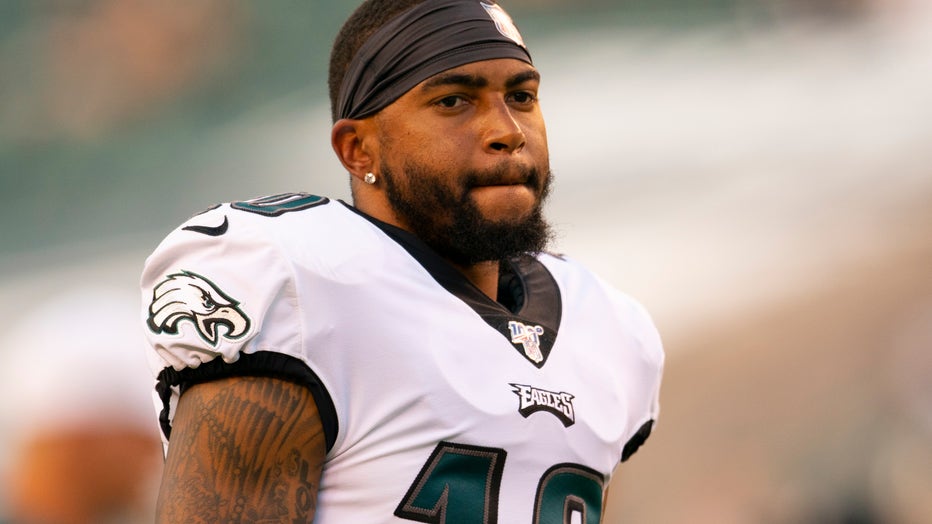 One of the posts shared included anti-Semitic quotes that were attributed to Adolf Hitler.

The quote starts with "Hitler says," and refers to the "real children of Israel," as well as Jewish people keeping this secret in "their plan for world domination."

Jackson later posted a follow-up saying, "Anyone who feels I have hate toward the Jewish community took my post the wrong way. I have no hatred in my heart towards no one. Equality, equality."

In a new post, Jackson left only one line of the original quote - the line about "world domination." Those posts remained on his page as of Tuesday afternoon, but were set to expire by 3 p.m.

Jackson also posted two pictures of noted anti-Semitic preacher Louis Farrakhan, which have since been removed.

In one caption, Jackson wrote: “This man powerful I hope everyone got a chance to watch this !! Don’t be blinded. Know what’s going on.”

He also posted a quote-picture attributed to Farrakhan, which read: “There must be 100% change… There’s a burden the Earth is carrying that it must be relieved from. The Earth is burdened by the wicked living on a planet that was made for the righteous.”

Jackson also posted a video on his Instagram Stories relating to Bill and Melinda Gates talking about vaccines. The caption on the video read: “Farrakhan warns against vaccines.”

The Philadelphia Eagles released the following statement on Tuesday:

"We have spoken with DeSean Jackson about his social media posts. Regardless of his intentions, the messages he shared were offensive, harmful, and absolutely appalling. They have no place in our society, and are not condoned or supported in any way by the organization. We are disappointed and we reiterated to DeSean the importance of not only apologizing, but also using his platform to take action to promote unity, equality, and respect. We are continuing to evaluate the circumstances and will take appropriate action. We take these matters very seriously and are committed to continuing to have productive and meaningful conversations with DeSean, as well as all of our players and staff, in order to educate, learn, and grow."

Jackson, 33, shared a video and statement apologizing for the posts on Tuesday afternoon saying in part "I truly apologize for posting it and sorry for any hurt I have caused."

"I post a lot of things that are sent to me. I do not have hatred towards anyone. I really didn’t realize what this passage was saying. Hitler has caused terrible pain to Jewish people like the pain African-Americans have suffered. We should be together fighting anti-Semitism and racism. This was a mistake to post this and I truly apologize for posting it and sorry for any hurt I have caused."

In the video, Jackson says, "I'm one that's fair and I never want to put any race down or any people down. My post was definitely not intended for anybody of any race to feel any type of way, especially the Jewish community. When I posted what I posted I definitely didn't mean it to the extent that you guys took it."

"I just wanted to let you guys know that I'm very apologetic, and I just want you guys to understand that it never was intended to put any race down, or any religion down," he added.

“DeSean’s comments were highly inappropriate, offensive and divisive and stand in stark contrast to the NFL’s values of respect, equality and inclusion. We have been in contact with the team which is addressing the matter with DeSean.”

Among those speaking out against Jackson's posts is former Eagles president Joe Banner.

"If a white player said anything about AA’s as outrageous as what Desean Jackson said about Jews tonight there would at least be a serious conversation about cutting him and a need for a team meeting to discuss. Which would be totally appropriate. Absolutely indefensible," Banner wrote on Twitter.

"The anti-Semitic comments displayed by DeSean Jackson on his Instagram are deeply offensive and disturbing. These words have been used for centuries to support the vilification and extermination of Jews.  As a representative of our city, we call on DeSean Jackson to stop spreading hate and bigotry and to become better educated about anti-Semitism."