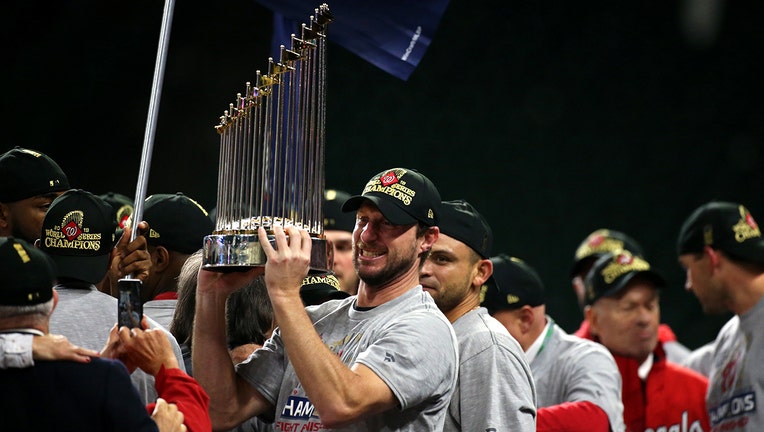 The Washington Nationals celebrate after defeating the Houston Astros in Game 7 to win the 2019 World Series in Houston, Texas, October 30, 2019. (MLB Photos via Getty Images)

The playoffs would grow from 10 clubs to 14 under the plan, first reported Monday by the New York Post. There would be four wild cards in each league, up from two.

Any proposal would have to be negotiated with the players' association. The current collective bargaining agreement runs through the 2021 season.

"Expanding the playoffs in a sensible way is something worth discussing when part of a much more comprehensive conversation about the current state of our game," union head Tony Clark said in a statement.

Only the division winner with the best regular-season record would advance directly to the Division Series under the plan. The two other division winners and wild-card teams would start in a best-of-three round.

The selections would be made on a televised show.

MLB long restricted its postseason to just the pennant winners facing each other in the World Series. Postseason teams doubled to four with the split of each league into two divisions in 1969, then to eight with the realignment to three divisions and the addition of a wild card in 1995, a year later than planned due to a players' strike.

The postseason reached its current 10 with the addition of a second wild card and a wild-card round in 2012.

A postseason of 14 teams would mean 47% of franchises reach the playoffs, which could cause some clubs not to go into rebuilding mode. The players' association has criticized teams for what it calls "tanking."

Expanded playoffs would create more content for broadcasters. MLB's contracts with ESPN and Turner run through 2021 and its deal with Fox goes through 2028.