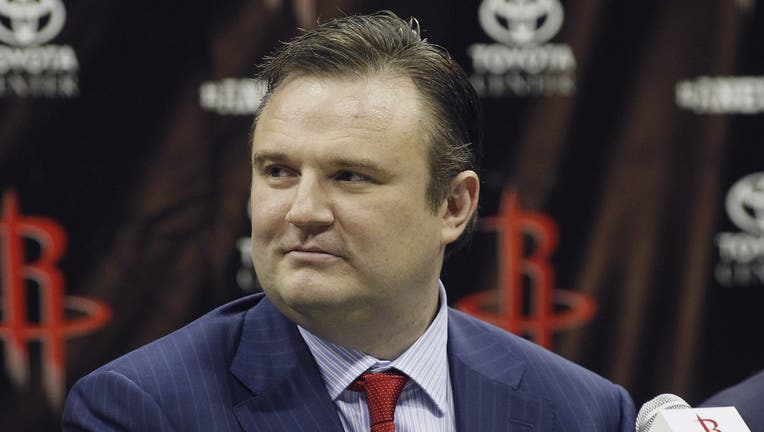 PHILADELPHIA - The Philadelphia 76ers have made it official as they announce Darly Morey will become their President of Basketball Operations, while General Manager Elton Brand signed a multi-year contract extension.

The deals come as part of the team's front-office overhaul that began after an underachieving season.

Morey stepped down as GM of the Rockets earlier this month after blockbuster moves that failed to lead the franchise to the NBA Finals. The Rockets made the playoffs 10 times since Morey was hired in 2007, including the last eight seasons, for the longest active streak in the NBA.

He was responsible for the trade that brought James Harden to Houston from Oklahoma City. The Rockets reached the Western Conference finals twice under Morey but were unable to win their first championship since consecutive titles in 1994-95.

The Sixers named Doc Rivers coach this month as they chase their first NBA championship since 1983. They also brought in former Saint Joseph's star and NBA player Jameer Nelson as a scout and hired former Pacers executive Peter Dinwiddie as executive vice president of basketball operations. Prosper Karangwa was hired away from Orlando and brought in as VP of player personnel.

Sam Hinkie was the former general manager who designed “The Process” in Philadelphia — the act of stripping the roster of talent in order to rebuild through draft picks and salary cap space to go after big stars. Hinkie worked under Morey in Houston before taking the job in Philadelphia and led the Sixers through one of the worst stretches of basketball in NBA history.

The Sixers eventually gave up on Hinkie's grand design and churned through general managers and the Brett Brown coaching era with little to show for it. They went to back-to-back Eastern Conference semifinal appearances but were swept by Boston in the first round this season, which led to Brown's exit.

The Sixers believed they were ready to contend for their first championship in 37 years and Brand spent $180 million to re-sign Tobias Harris and nearly $100 million to sign free agent Al Horford away from Boston. Ben Simmons and Joel Embiid emerged from The Process to become All-Stars and earn hefty contracts but have yet to prove they can carry the Sixers into serious championship contention.

The Sixers had only snippets of consistent success and Brown paid the price. Team owners Josh Harris and David Blitzer have been aggressive at reshaping the front office while keeping Brand aboard as the face of the organization.

Hinkie started The Process and now it's up to Morey, to finally complete what his onetime underling started. He'd have to get right to work. The Sixers have the No. 21 pick in the first round and four second-round selections in the Nov. 18 draft.