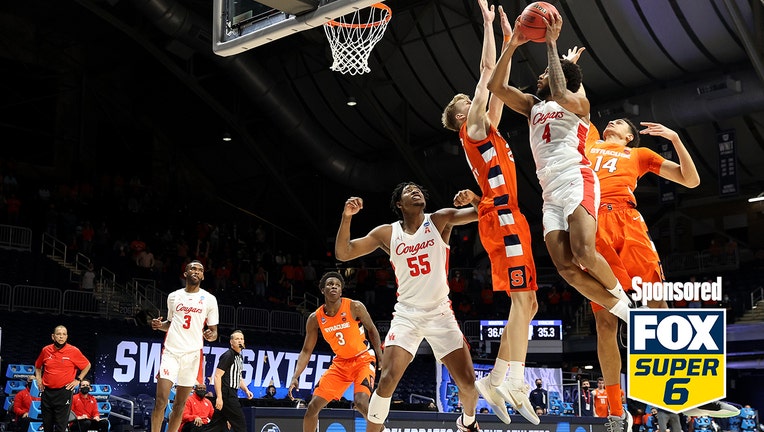 Justin Gorham of the Houston Cougars goes up for a shot against Marek Dolezaj of the Syracuse Orange in the second half of their Sweet Sixteen game of the 2021 NCAA Men's Basketball Tournament at Hinkle Fieldhouse on March 27, 2021 in Indianapolis, I

What a long and strange tournament it has been.

Normally, the NCAA Tournament is a referendum on the power of the teams playing in the Eastern half of the United States. The Big East, the ACC and the SEC have combined for 35 out of 80 teams that made the Final Four between 2000 and 2019.

This year, those three conferences have one chance ⁠— Arkansas ⁠— to make it to the last weekend of the Indianapolis-based tournament. Instead, it has been the Pac-12 that has ruled the storylines with three teams ⁠— No. 6 seed USC, No. 11 seed UCLA and No. 12 seed Oregon State ⁠— joining the Elite Eight.

And yet, despite all the upsets, we are left with three top seeds – Gonzaga, Baylor and Michigan ⁠— that have been the top three teams virtually the entire season all holding serve. The fourth bracket is led by a No. 2 seed in Houston that flew under the radar for most of the year, survived a second-round scare against Rutgers, and now could head back to the Final Four for the first time in 37 years.

And the best way to get caught up in the excitement is by playing FOX’s Super 6 for the Elite Eight round.

Correctly answer all six questions and you could win the $1,000 grand prize. Best of all, it’s free by downloading the FOX Super 6 app on your phone or tablet.

Here are the questions and options for the upcoming round, along with some things to keep in mind:

1. How many underdog teams (according to FOX Bet) will win their games in the Round of 8?

The four underdogs, according to FOX Bet, are Oregon State (+8) against Houston, Arkansas (+8) against Baylor, USC (+8.5) against Gonzaga, and UCLA (+7.5) against Michigan. On the surface, Arkansas would appear to be the least-surprising upset as the No. 3 seed, but the Razorbacks needed to scrape and claw their way against Oral Roberts on Saturday night. Baylor doesn’t seem like a great matchup for the Razorbacks.

The pick here would be Oregon State, which has been on fire since before the Pac-12 tournament. The Beavers have the best chance against a Houston team that was vulnerable against Rutgers in the second round. UCLA also has a puncher's chance against Michigan, but the Wolverines have grabbed a second life in this tournament and looked impressive against a really deep Florida State team. As for USC against Gonzaga ⁠— nobody has beaten the Zags yet this season, so the Trojans have their work cut out for them.

2. Which game will have the most total points scored?

Five of the six games that Gonzaga and USC have played in this tournament have seen those two teams score more than 80 points. Among the other six teams left, only Michigan has gotten past the 80-point mark twice in their first three games of the tournament. Both the Zags and Trojans are capable of getting into some big numbers.

3. Which game will be decided by the fewest number of points?

If you believe the FOX Bet lines, all of them are in the same range of 7.5 to 8.5 points. The hunch here is that UCLA/Michigan could finish with the tightest margin of victory, however. The Wolverines have survived the injury to Isaiah Livers – who will not return in this NCAA Tournament ⁠— but UCLA has been playing with such a world of confidence that not even an Alabama buzzer-beater to send the game to overtime rattled them. Only one team ⁠— Virginia Commonwealth in 2011 ⁠— has gone from the First Four to the Final Four. It isn’t beyond belief that the Bruins could be the second.

4. Which game will feature the highest-scoring player in the Round of 8?

Gonzaga and USC can score in bunches. Given the way that the other three games show signs of a defensive presence that could make life difficult for a really top-notch scorer ⁠— the Baylor/Arkansas game is a prime example ⁠—  thinking that the Zags or Trojans will have someone who steps above the fray is a really good and safe bet. Drew Timme? Evan Mobley?

The four favorites are three 1-seeds (Gonzaga, Baylor, Michigan) and a 2-seed (Houston). It just seems impossible to think Gonzaga’s run ends here. Baylor might be a little vulnerable, especially if they struggle shooting from the outside ⁠as they did against Villanova on Saturday, but that feels like the bad game out of their system. Michigan could be vulnerable, but UCLA could hit a fatigue factor on Tuesday night after playing five tournament games in 12 days.

The wild card here is Oregon State. The Beavers' run has been so remarkable and they’ve beaten three really good teams in Tennessee, Oklahoma State and Loyola-Chicago and made them each look bad. Every tournament has that team that gets to the last weekend and you do a double-take and wonder how they got here. This could be Oregon State's year to be that team.

6. Which player will score the most points in their Round of 8 game?

Timme is the choice here, coming off his 22-point game against Creighton which followed a 30-point outburst against Oklahoma. The Zags sophomore center is averaging 20.2 points a game in the tournament.

Play the FOX Super 6 Tourney Challenge all tournament long for your chance to win thousands of dollars every round! Just download the FOX Super 6 app for free and make your picks now.