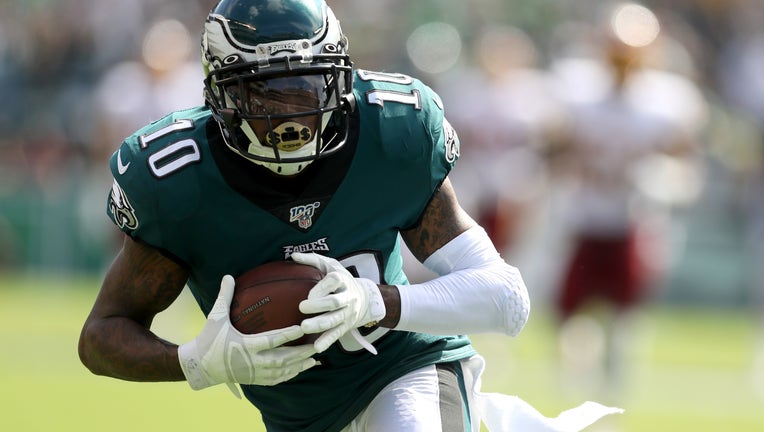 DeSean Jackson #10 of the Philadelphia Eagles catches a third quarter touchdown pass against the Washington Redskins at Lincoln Financial Field on September 08, 2019 in Philadelphia, Pennsylvania. (Photo by Rob Carr/Getty Images)

PHILADELPHIA - New England Patriots wide receiver Julian Edelman says he and DeSean Jackson have spoken over the phone after he extended an invitation to tour the U.S. Holocaust Memorial Museum.

"DeSean and I spoke for awhile (sic) last night. We're making plans to use our experiences to educate one another and grow together. Stay tuned," Edelman tweeted Friday morning.

Edelman, who is Jewish, released a video on social media Thursday morning saying he saw Jackson's posts and saw "an opportunity to have a conversation."

Edelman added that he would welcome a trip with Jackson to the U.S. Holocaust Memorial Museum and the National Museum of African American History and Culture in D.C.

ESPN's Adam Schefter reports that Jackson is "trying to educate himself." Schefter says he met with a group against anti-Semitism on Thursday and plans to meet with a 94-year-old holocaust survivor.

On Friday, Former Philadelphia Eagle Malcolm Jenkins also weighed in on the controversy explaining in an Instagram video that they "were wrong," and called the back and forth, "a distraction."

"We've got to stay focused. All of this back and forth that's going on right now is a distraction. Comments were made, and they were wrong. Allow those who were impacted by it to voice their grievances. But we've got to stay focused, because Breonna Taylor's killers are still not arrested," Jenkins says in the video.

Jenkins added a caption that read:  "We can honor the Jewish heritage and trauma while staying focused on what matters. Jewish people aren’t our problem, and we aren’t their problem. Let’s not lose focus on what the problem truly is, and that’s that black lives still don’t matter in this country. Push this energy toward arresting and convicting the killers of Breonna Taylor and burning systemic racism to the ground"

Former Eagle Chris Long also weighed in on the controversy earlier this week on his Green Light Podcast. He called the post a "disaster," adding, “I mean, quoting Hitler is bad business, but quoting fake Hitler quotes is like a cherry on top.”

"I am just not willing to accept anybody saying 'stick to the task at hand, we can't address people making anti-Semitic comments,'" Long said.

"Certainly anti-Semitism is not the main event in this country, but we can walk and chew gum here.," he later added.

​​For the latest local news, sports and weather, download the FOX 29 News app.