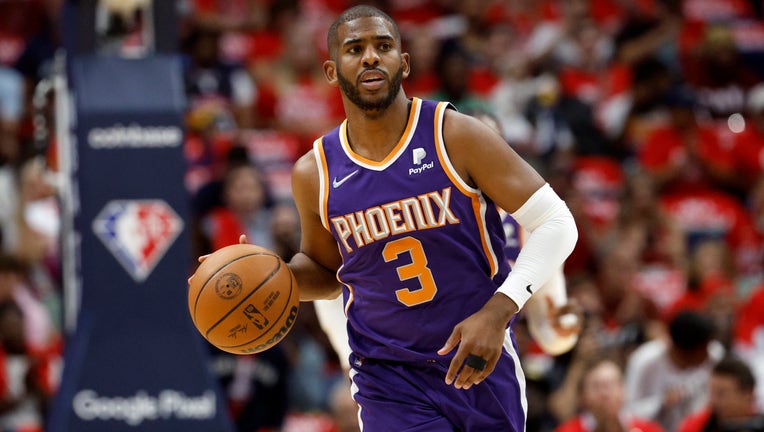 NEW ORLEANS, LOUISIANA - APRIL 28: Chris Paul #3 of the Phoenix Suns looks on during the game against the New Orleans Pelicans at Smoothie King Center on April 28, 2022 in New Orleans, Louisiana. NOTE TO USER: User expressly acknowledges and agrees t

NEW ORLEANS - Chris Paul has accomplished so many things in his 17 NBA seasons that it’s nearly impossible to rank his Mount Rushmore moments.

Short of a title, perfection, however, might be hard to beat.

Paul was 14 for 14 — the most field goals without a miss in an NBA playoff game — in the Phoenix Suns’ 115-109, series-ending victory over the New Orleans Pelicans on Thursday night.

"I had no clue," said Paul, the former Pelican who finished with 33 points and eight assists. "I think maybe at halftime I said I might have to shoot a little more. But throughout the game, I was literally managing the game. I wasn’t taking heat checks. I don’t shoot enough to have heat checks."

The top-seeded Suns overcame a 10-point halftime deficit to finish off the Pelicans in six games. Phoenix set up a second-round series with Dallas, a 98-96 winner at Utah in another Game 6 later Thursday.

Paul led Phoenix to victories by scoring 19 points in the fourth quarter of Games 1 and 3 after trying to distribute the ball to teammates in the first three quarters. Suns coach Monty Williams said it was difficult to rank Paul’s achievements as a scorer, leader and game manager.

Booker returned from a hamstring injury to hit a late 3-pointer that gave the Suns the lead for good — fittingly, with an assist from Paul.

Booker played for the first time in nine days since straining his right hamstring after scoring 31 points in the first half of Game 2. He scored 13 points on 5-of-12 shooting and had five rebounds and three assists in 32 minutes.

"It was really nice to have him back," Paul said. "All that pressure they’ve been doing against us the whole series, especially the last three games, was tough. (Booker) was on that left wing, and I don’t know if they forgot or didn’t realize who he was, but I saw how they were shifted."

"It caught me off guard, too," Booker said. "You don’t normally get clean looks like that."

Deandre Ayton had 22 points for Phoenix on 10-of-12 shooting.

Ingram led the Pelicans with 21 points and 11 assists.

New Orleans coach Willie Green, one of Paul’s closest friends, said he didn’t have to be told about how special Paul’s 14-of-14 night was.

"Don’t remind me of that right now," he said, smiling. "I’m proud we stood the test. I couldn’t ask for any better effort."

Suns: Williams said Booker ramped up his conditioning while nursing a hamstring injury by playing one-on-one with assistant coach Jarrett Jack in the last several days. "He’s been on the floor with Jack a few times, doing the best he can to get to that point," Williams said.

Pelicans: The Pelicans outrebounded the Suns 279-215 in the series.

The Suns and Mavericks will open the second round Monday night in Phoenix.