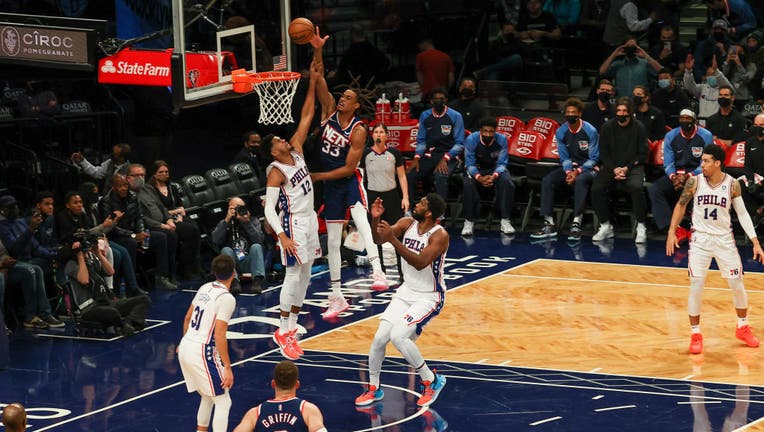 PHILADELPHIA - The Philadelphia 76ers matchup against the New Orleans Pelicans was one of five games shelved on Sunday as COVID-19 infections continue to balloon.

The Sixers already had ruled out five players, including Georges Niang. and Furkan Korkmaz. Joel Embiid,Tyrese Maxey and Danny Green were all questionable to play before the postponement.

The NBA also postponed Cleveland at Atlanta and Denver at Brooklyn on Sunday. The Orlando Magics' game in Toronto on Monday was also shelved, and the Wizards' trip to Brooklyn was moved to a later date.

Leaguewide, through Sunday afternoon, there were at least 68 players who have either been ruled out to play — or in the case of the postponed games, would have been ruled out — because they are in the protocols. That number has soared in recent days, with the NBA just one of many sports leagues worldwide dealing with a rapidly worsening issue.

U.S. officials are expecting a wave of breakthrough infections among the vaccinated given the surge of holiday travelers and gatherings expected in the coming days. The NBA has said 97% of players are fully vaccinated and somewhere around 60% had received boosters as of last week. It was not clear how many of the current positive cases involve those who are ineligible for a booster shot or those who have chosen not to receive one.

Also not clear is how many of the NBA cases involve asymptomatic players. The NFL has revised its protocols so that only unvaccinated players and those experiencing possible symptoms of COVID-19 will be tested. The NHL has five teams shut down through Christmas because of outbreaks, and numerous college games at all levels have been canceled in recent days.