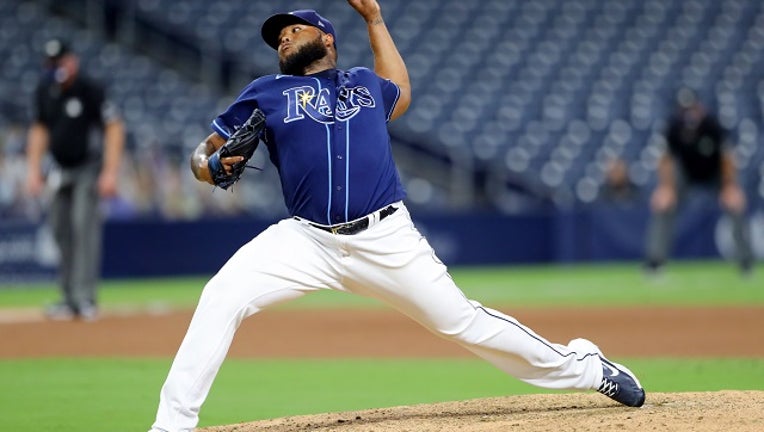 Jose Alvarado #46 of the Tampa Bay Ray pitches during Game 6 of the ALCS between the Tampa Bay Rays and the Houston Astros at Petco Park on Friday, October 16, 2020 in San Diego, California. ((Photo by Alex Trautwig/MLB Photos via Getty Images))

PHILADELPHIA - The Philadelphia Phillies announce they have signed left-handed pitcher Jose Alvarado, in a three-way trade with the Los Angeles Dodgers and the Tampa Bay Rays.

The club made the announcement Tuesday.

Alvarado, a left-handed relief pitcher, comes to the Phillies from the Tampa Bay Rays, while left-hander Garrett Cleavinger is headed to the Dodgers. Meanwhile, Tampa Bay will get infielder Dillon Paulson and a player to be named later, to finalize the deal.

Alvarado has played in 149 games. He has a 3.46 ERA and has struck out 27.9 percent of the total batters he has faced. Alvarado ranks with all active pitchers with at least 130.0 innings pitched since 2017 and his .302 opponent’s slugging percentage is the eight-best in the majors among left-handers. Alvarado is ranked fourth.