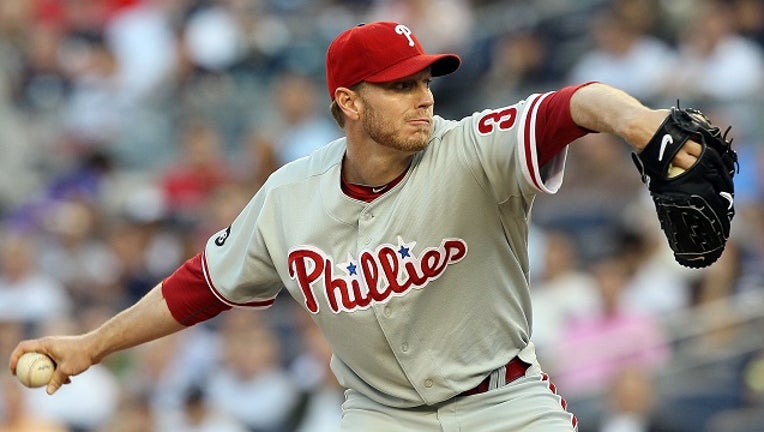 Roy Halladay #34 of the Philadelphia Phillies delivers a pitch against the New York Yankees on June 15, 2010 at Yankee Stadium in the Bronx borough of New York City. (Photo by Jim McIsaac/Getty Images)

PHILADELPHIA - The Phillies will officially retire Roy Halladay’s No. 34 during a pregame ceremony at Citizens Bank Park on Sunday, August 8 during Wall of Fame Weekend.

Taking part in the ceremony will be Carlos Ruiz, the catcher behind the plate for Roy Halladay's perfect game in 2010 and his no-hitter in that year's postseason. Also celebrating Halladay’s incredible baseball career will be fellow Hall of Famer Steve Carlton and Doc’s teammate Raúl Ibañez.

Halladay’s number will be unveiled above the rooftop in Ashburn Alley, joining other elite players whose numbers have been retired by the Phillies.

The ceremony will also feature the unveiling of a six-foot-high, No. 34 statue at the Third Base Plaza, where it will stand permanently alongside Dick Allen’s No. 15. This statue is similar to the other retired number statues at the Left Field Plaza.

Players will wear a jersey patch with the No. 34, and base jewels for the game will also include Doc’s retired number.

Halladay died tragically in November of 2017 at the age of 40.