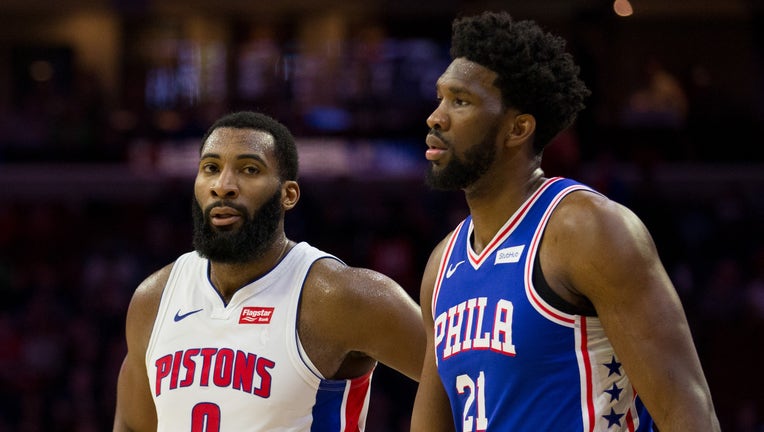 Andre Drummond #0 of the Detroit Pistons and Joel Embiid #21 of the Philadelphia 76ers look on at the Wells Fargo Center on December 10, 2018 in Philadelphia, Pennsylvania. (Photo by Mitchell Leff/Getty Images)

PHILADELPHIA - The Philadelphia 76ers have reportedly agreed to terms on a one-year deal with center Andre Drummond.

The signing of the 6-foot-10 former All-Star would bolster the Sixers frontcourt behind Joel Embiid following the reported departure of Dwight Howard.

Drummond started the 2020-21 NBA season with the Cleveland Cavaliers before he and the team agreed to a buyout during the season. He then spent the remainder of the regular season and playoffs as a member of the Lakers.

The 27-year-old started his career with the Detroit Pistons after they selected him with the ninth overall pick in the 2012 NBA Draft out of the University of Connecticut.

Drummond was selected to two All Star teams during his time in Detroit and has led the NBA In rebounds for four seasons, including 2020.

The reported signing comes less than a day after the team reportedly agreed to a 3-year deal to bring back Turkish swingman Furkan Korkmaz.