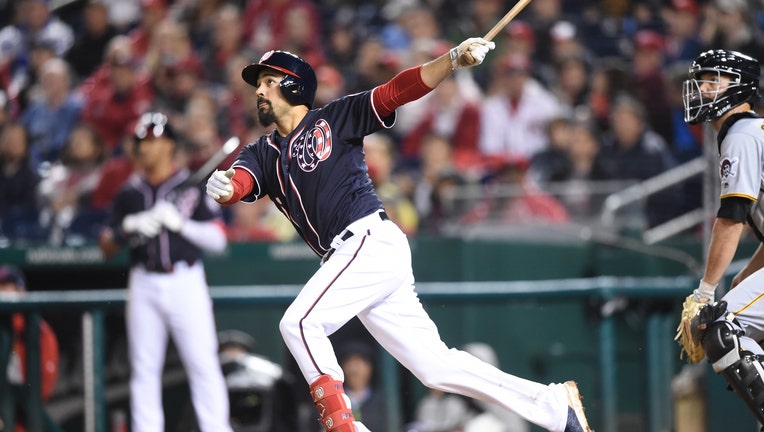 WASHINGTON, DC - APRIL 12: Anthony Rendon #6 of the Washington Nationals hits a solo home run in the third inning during a baseball game against the Pittsburgh Pirates at Nationals Park on April 12, 2019 in Washington, DC. (Photo by Mitchell Layton/G

PHILADELPHIA - Winter has rolled around again and the Phillies are reportedly looking to sign another Washington Nationals slugger.

According to USA Today's Bob Nightengale, the Phillies are prepared to make a strong run at free agent third baseman Anthony Rendon, despite a tight budget.

Philadelphia has been rumored to want to remain under the luxury tax threshold, but Nightengale says a play for Rendon combined with other areas of need on the roster would surely result in 20% penalty on payroll above $208M.

Nightengale estimates Rendon will demand an 8-year contract that pays north of $250M.

Donaldson, a 10 year veteran, drove in 94 runs and launched 37 home runs during his first season in Atlanta. The 33-year-old won an MVP Award in 2015 with Toronto and is a three time all star.

The report estimates that Donaldson could fetch a three or four year deal in the neighborhood of $75M.

Nightengale notes that the Phillies have never exceeded the tax threshhold, even after inking Bryce Harper to a record-setting 13 year, $330M pact last winter, but the penalty won't deter owner John Middleton from being aggressive on the free agent market.