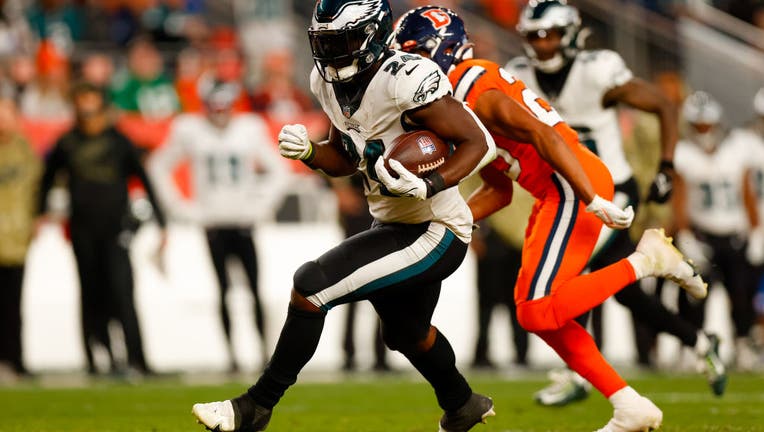 DENVER, CO - NOVEMBER 14: Running back Jordan Howard #24 of the Philadelphia Eagles runs with the football during the second half against the Denver Broncos at Empower Field at Mile High on November 14, 2021 in Denver, Colorado. (Photo by Justin Edmo

Cornerback Darius Slay seized both the loose football and the moment.

Slay scooped up the loose football on the final play of he third quarter and returned it 83 yards for a touchdown, sparking the Philadelphia Eagles' 30-13 upset of the Denver Broncos on Sunday.

The Broncos were driving for the tying touchdown late in the third quarter when linebacker Davion Taylor punched the ball out of Melvin Gordon III's arms just as he bulled his way across the line on fourth-and-1 from the Eagles 23.

"An offensive lineman tried to grab it," Slay recounted. "I just snatched it out of his hand quick, like, ‘Nah, give me that. That’s mine.'"

Slay lost the handle on it himself and with tight end Albert Okwuegbunam bearing down on him, Slay recovered it on the bounce at his 18, stuck his left arm in the grass to keep his balance at the 16, then gathered himself at his 12 as linebacker Genard Avery blocked tight end Noah Fant.

Slay reversed field and ran down the Eagles' jubilant sideline, slipping tight end Eric Saubert's tackle at the 30-yard line and racing right past quarterback Teddy Bridgewater — who didn't even try to tackle him — at the Philadelphia 45.

Bridgewater explained he was trying to turn Slay back toward the middle of the field so a teammate could make the tackle, but there were no more orange jerseys at that point and Slay's score as the quarter ended made it 27-13.

"I'm still out of breath from running down the sideline," Eagles coach Nick Sirianni said.

Who wasn't out of breath on the play? Bridgewater.

Asked if he made a business decision not to get in harm's—or Slay's—way, Bridgewater bristled.

Taylor, who played college ball at Colorado 45 minutes away, said he wanted to block for Slay downfield "but he was making so many moves I didn't know who to block."'"

"And then I just saw him breaking out and I was like, ’Yep, he’s gone,'" Taylor said. "Nobody’s going to catch him because I know the speed he has and he showed it tonight."

Rookie DeVonta Smith hauled in two TD passes from Jalen Hurts and the Eagles (4-6) rushed for 214 yards in winning their fourth road game.

They prevented the Broncos (5-5) from sweeping the NFC East teams on their schedule just one week after Denver dominated Dallas in one of the biggest upsets of the season.

Five times the Broncos crossed the Eagles' 25-yard line and just once did they reach the end zone, on Gordon's 1-yard run in the first half. They frittered away several golden opportunities, including a 22-yard field goal try by Brandon McManus that was blocked by safety K’Von Wallace, who sliced through the line untouched just like a Dallas defender did on a punt last week.

"With everybody crammed in there, you’re better off to just put two hands on it," Gordon said. "Slay, I mean, he was just trying to get the ball and, he’s a great player, made a great play."

The Broncos had hoped to hit their bye week at 6-4 and in the thick of the AFC West race as they try to end a long playoff drought.

And Slay scooped it right up.

With offensive coordinator Pat Shurmur out with a COVID-19 infection, Fangio praised Broncos QBs coach Mike Shula's play calls. But the first series was a debacle: a 1-yard run, and a drop and a catch for minus-2 yards on two passes behind the line of scrimmage sandwiched by a field goal and a TD by Philadelphia.

Fangio said he would hold Monday meetings remotely because of the rash of COVID-19 cases that began with backup QB Drew Lock a week ago and now includes three other players, Shurmur and a practice squad member.

Fangio said the rash of COVID-19 cases has had a deleterious effect on his team.

"It's a distraction, there's no two ways about that," Fangio said. "We went from nine weeks of being back to normal and then all of a sudden we were back into last year's mode. So, it is a distraction. But that's what this league is: full of distractions and you've got to overcome them."

Eagles TE Dallas Goedert left the game with a concussion after an unflagged helmet-to-helmet hit by Simmons on a 24-yard catch that set up the Eagles' first touchdown. Broncos ILB Baron Browning, the team's defensive play caller, injured his back on Denver's second defensive series and didn't return.

Broncos: Denver hosts the Chargers on Nov. 28 after its bye.