PARIS - The U.S. Women’s National Team will face hosts France in the 2019 Women’s World Cup quarterfinal, and it’s not just the fans who can’t wait for the match.

"I hope it's huge and crazy. That's what it should be," U.S. captain Megan Rapinoe said after the match was set. "This is the best game, this is what everybody wanted. I think we wanted it, seems like they're up for it, you guys are of course are up for it, and all the fans."

DOWNLOAD THE APP TO WATCH THE USWNT'S MATCH AGAINST FRANCE

The match between the U.S. and France has been highly anticipated since the tournament draw in December with France hoping to become the first nation to simultaneously hold both the men’s and women’s World Cup titles.

"It's going to be totally awesome. This is what everybody wants. And these are the biggest games that you kind of dream about as a kid," Rapinoe said. 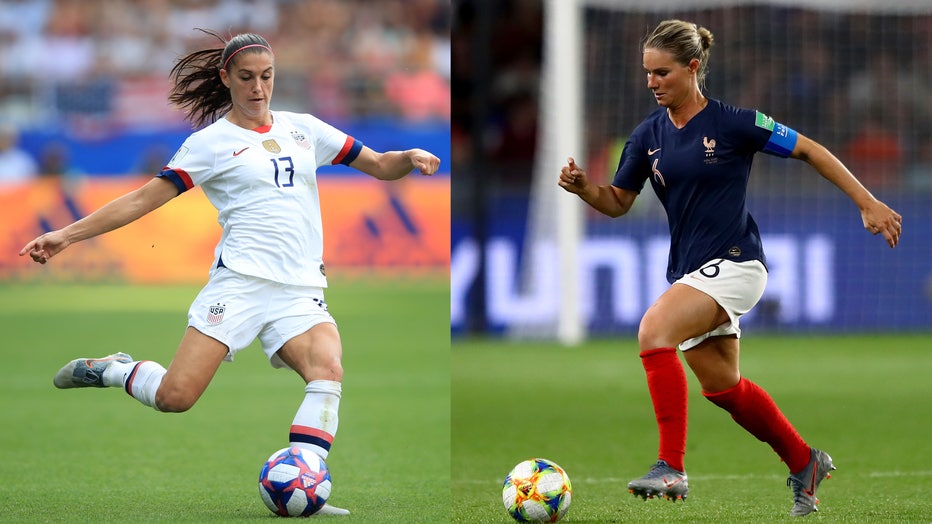 Alex Morgan of USA is shown during the 2019 FIFA Women's World Cup France Round Of 16 match, alongside an image of Amandine Henry of France running with the ball during the France group A match. (Photos by Marc Atkins/Getty Images)

The United States advanced with a physically challenging win over Spain in the round of 16, while France scored in extra time to get past resilient Brazil.

The top-ranked U.S. team was dominant during the group stage of this year’s World Cup, winning their matches against Thailand, Chile and Sweden, respectively. The team also marked a Women’s World Cup record for the total goals in a group stage at 18.

But Spain posed a challenge to the three-time champions, relentlessly targeting Alex Morgan and using brawn to counter the Americans' superior speed.

Rapinoe scored on a pair of penalty kicks for the 2-1 victory in Reims on Monday night, although the game-winner in the 75th minute was the result of what many thought was at best minimal contact between Spain's Virginia Torrecilla and Rose Lavelle. The foul was confirmed after video review.

Players said the difficult match was crucial to the team's preparation going into the quarterfinal against the fourth-ranked French, the first time the U.S. has faced the host in a World Cup. The Americans could also face No. 3 England if they go through to the semifinals.

France also got a tough test out of the way, finishing atop their group with three wins before surviving their knockout opener. Captain Amandine Henry redirected Amel Majri's free kick for a tiebreaking goal in the 107th minute of a 2-1 victory Sunday night in Le Havre. Valérie Gauvin, whose first-half goal was disallowed in a video review, put France ahead early in the second but Thaisa tied the score 11 minutes later for No. 10 Brazil.

Afterward, French coach Corinne Diacre was critical of her team, saying, "We weren't at our best.“

"Obviously, I know my players inside out. I know that we weren't 100 percent today and the objective is to hit that 100 percent for the next game," Diacre said through a translator. "Will this happen? I don't know. I don't have a magic wand. I don't have a crystal ball. I can't see into the future. But it's something that we're working on."

The Americans have played the French 23 times, with France winning just three. But one of those was a friendly in January, when Kadidiatou Diani - who wasn't named to France's World Cup roster - scored twice in a 3-1 victory.

While great for the sport, the match Friday also means that one of the favorites will be headed home on Saturday. A lopsided draw put three of the world's top teams on one side of the bracket, while No. 2 Germany tops the other.

The Germans, two-time World Cup winners, won their knockout round opener 3-0 against No. 38 Nigeria, setting up a quarterfinal Saturday against No. 9 Sweden in Rennes. The Swedes knocked Canada out of the tournament with a 1-0 victory on Monday night.

"I truly believe this is the world game for women, and so what a showcase piece. I'm sure a lot of people would like it later in the tournament, but it is what it is," Ellis said. "Myself and probably Corinne are both like, 'We've got good players, good teams and good setups, so let's go for it.'"