USWNT defeats Spain 2-1 in knockout round

The U.S. will face France in the quarterfinals June 28 in Paris.

REIMS, France - The U.S. Women’s National Team defeated Spain 2-1 Monday in the knockout round of the 2019 FIFA Women's World Cup, sending the team a step closer to defending its title.

Tobin Heath was awarded a penalty early in the match and team captain Megan Rapinoe scored in the seventh minute, giving USA the lead. 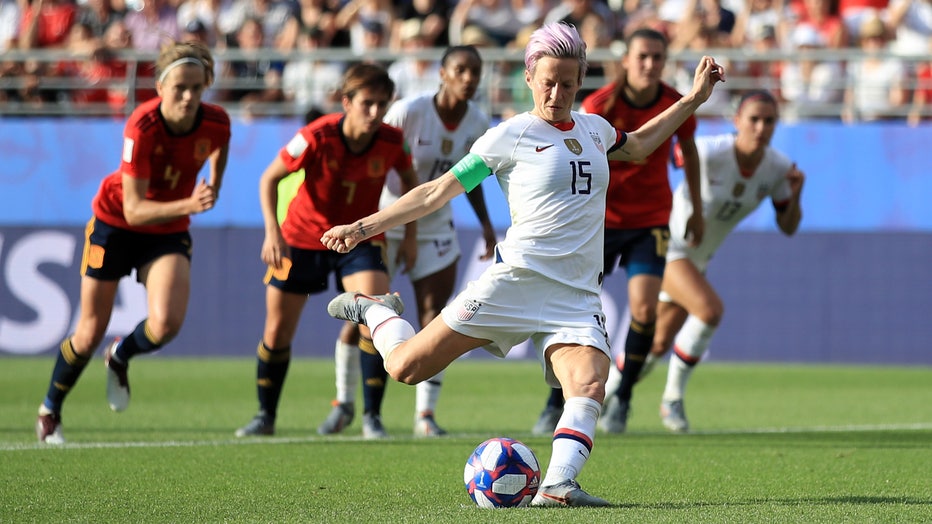 Megan Rapinoe of the USA scores her team's second goal from the penalty spot during the 2019 FIFA Women's World Cup France Round Of 16 match between Spain and USA on June 24, 2019 in Reims, France. (Photo by Marc Atkins/Getty Images)

Spain then answered right back with Jenni Hermoso tying up the game 1 to 1, which was the first goal the Americans had allowed in France.

The score remained tied in the second half until Rapinoe put the U.S. up 2 to 1 following a penalty, burying the ball in the low corner. Video review was used to confirm a foul on Rose Lavelle that gave Rapinoe the game-winner in the 75th minute.

Spain, ranked No. 13 in the world, reached the knockout stage for the first time in only their second-ever appearance at the Women’s World Cup. The team, known as La Roja or “The Red” in Spanish, finished second place in Group B with four points.

RELATED: The top rivalries to look out for at the 2019 Women’s World Cup

USWNT was dominant during the group stage of this year’s World Cup, winning their matches against Thailand, Chile and Sweden, respectively.

The team also marked a Women’s World Cup record for the total goals in a group stage at 18.