The FIFA World Cup is the biggest men's soccer tournament in the world. Here's a look at the eight countries that have won the World Cup since the tournament was first held in 1930.

COLUMBUS, Ohio - Tim Weah scored on a shot that deflected off the goalkeeper in the 66th minute after Sergiño Dest started the comeback from a first-minute deficit, and the United States rallied past Costa Rica 2-1 on Wednesday night to ease pressure as World Cup qualifying neared the halfway point.

Goalkeeper Zack Steffen, one of nine new starters inserted by coach Gregg Berhalter following Sunday’s dismal 1-0 loss at Panama, made a costly headed clearance that led to Keysher Fuller’s goal 60 seconds in, the fastest goal conceded by the U.S. in 23 years.

Dest, another new starter by his rotation-emphasizing coach, tied it in the 25th minute when he curled a shot past Keylor Navas.

"I was like, I have to shoot it," Dest said. "I was just so happy We needed that goal. It was a really important goal."

Navas, one of the world’s top goalkeepers, strained an adductor muscle and was replaced by Leonel Moreiera at the start of the second half.

Weah, a son of Liberia President and former FIFA Player of the Year George Weah, wasn’t in the original starting lineup but was announced just before kickoff in place of Paul Arriola, who injuired his right groin. He tied it when Weston McKennie passed to Dest, who dished to Weah. His 10-yard shot from an angle bounced off a diving Moreira and inside the near post.

Weah was originally credited with a goal, but it was changed to an own goal by Moreira.

The U.S. has 11 points after six of 14 matches, with its three toughest games still ahead — at home against Mexico on Nov. 12 plus away matches at Mexico and Costa Rica. 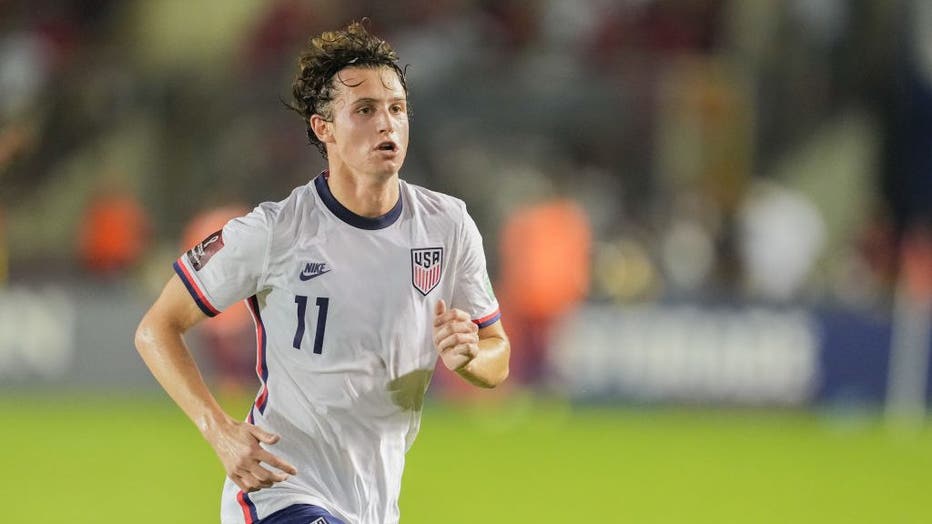 Brenden Aaronson, No. 11 of the United States, chasing after a ball during a game between Panama and USMNT at Estadio Rommel Fernández Gutiérrez on Oct. 10, 2021, in Panama City, Panama. (Photo by John Todd/ISI Photos/Getty Images)

Costa Rica, an aged team with a starting lineup that averaged more then 30 years old, has seven points. The Ticos had won their three previous qualifiers against the U.S., helping end a streak of seven straight American World Cup appearances.

A pro-American crowd of 20,165 attended the first international match at $300 million-plus Lower.com Field, which opened in July.

Chris Richards, a 21-year-old central defender, was given his first competitive start as the Americans fielded their youngest lineup in a World Cup qualifier at an average of 22 years, 229 days. That lowered the 23 years, 85 days from the 4-1 win at Honduras on Sept. 8.

Matthew Hoppe and Gianluca Busio entered in the second half, joining Steffen and Richards to increased U.S. qualifying debuts to 25 in this cycle, trailing only 1998 (29), and 2006 and 2010 (26 each). Richards was making just his fourth international appearance.

The Ticos scored after Steffen, the backup to Ederson at Manchester City, headed the ball to the right flank but over Dest. Bryan Ruiz kept the ball in with a backheel pass to Ronald Mattarita, who dribbled down the side and crossed. Just outside the 6-yard box, Fuller volleyed with his right foot, and the ball went in on two bounces inside the far post for his second international goal.

The U.S. had not conceeded that early since the Netherlands’ Ronald de Boer scored on a deflection off Alexi Lalas two minutes in after a bad pass by Roy Wegerle set up a breakaway in a 2-0 Dutch win at Miami on Feb. 21, 1998.

Dest ended a streak of eight straight first halves without an American goal.

Weah switched the ball to Musah on the right flank, and he passed to Dest. Given time and space, Dest took three touches as he cut toward the center. Dest curled the ball around Mattarita with a left-foot shot just beyond the right hand of Navas for his second international goal.

The U.S. nearly allowed another goal when Miles Robinson made a poor, slow backpass for Richards in the 56th minute that was intercepted by Ruiz. The 36-year-old Ruiz broke in alone on Steffen but lacks pace at his age, and Robinson was able to catch up and poke the ball away.