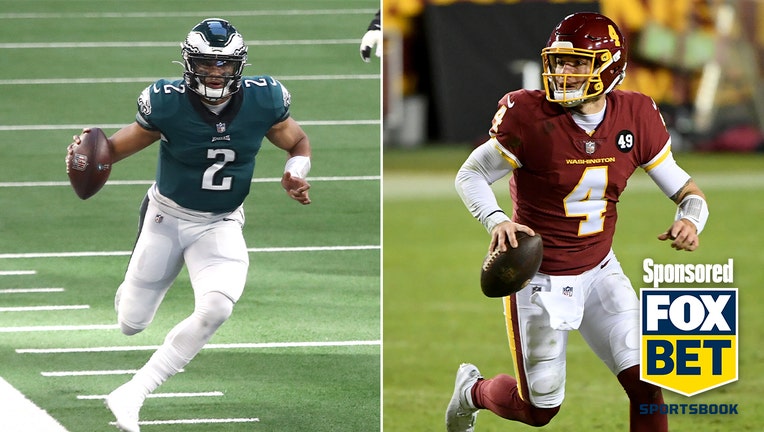 LEFT: Jalen Hurts #2 of the Philadelphia Eagles runs toward the end zone in the first half against the Dallas Cowboys at AT&T Stadium on December 27, 2020 in Arlington, Texas. (Photo by Ronald Martinez/Getty Images) RIGHT: Taylor Heinicke #4 of t

The first round pick of a quarterback was benched and eventually released. The front office is a constant sea of questions about infighting among the owners and ugly reports about off-field behavior. All this at the end of a year that saw everything about them change, from head coach and player personnel executives to the franchise’s long-standing nickname.

A lot of things have happened to the Washington Football Team through 2020. And that’s what makes it somewhat remarkable that they can begin 2021 with the most unexpected thing of all: an NFC East championship.

Washington (6-9) has a second crack at the division title on Sunday night (8:20 p.m., NBC) when they travel to Philadelphia to face the 4-10-1 Eagles at Lincoln Financial Field. A loss would mean that the winner of the New York Giants/Dallas Cowboys game – which will take place Sunday at 1 p.m. at the Meadowlands (FOX)- will take home the crown and a ticket to the NFC playoffs as the No. 4 seed.

Washington has been one of the best team in the NFL against the spread, going 9-6 this year. The Eagles are tied for worst in the league with Dallas and Houston at 5-10.

The first game of the year between the two teams on Opening Day proved to be a harbinger of what was to come for the whole season for the Eagles, who took a 17-0 lead early in the second quarter and then allowed 27 straight points to fall 27-17 to Washington at FedEx Field. Eagles quarterback Carson Wentz threw two interceptions, lost one fumble and was sacked eight times in the loss.

Washington leads the overall series 87-80-6 dating back to 1934. However, Philadelphia has won six of the past seven.

One other quirky note to watch in this one: the winner of the first game of the season series matchup has won the rematch five straight years and eight of the last nine seasons.

The biggest question for Ron Rivera this week is simple: who is your quarterback? Dwayne Haskins was released by Washington on Monday, one day after being pulled for Taylor Heinicke during a 20-13 loss to Carolina and one week after being spotted at a topless nightclub without a mask on following a loss to Seattle. Heinicke will get the start if the veteran Alex Smith can’t go because of a calf injury. Smith was a game-time decision last week against Carolina, so it is conceivable that Washington may be in the same mindset again this week with a division title on the line. Wide receiver Terry McLauren could also miss this week because of an ankle injury that forced him to miss the loss against Carolina.

Washington will not find any sympathy, however, from the Eagles. Philadelphia’s fall from Super Bowl champion in 2017 to potential Top 5 pick in the NFL Draft has been stunningly steep, born out of bad contracts and awful draft picks. Wentz’s opener proved to be the beginning of a season long struggle that saw him bench in Week 12 for rookie quarterback Jalen Hurts, who had two solid if not spectacular games against New Orleans and Arizona before taking a step back in a 37-17 loss to Dallas last week. The Eagles offense was shut out in the second half by a Cowboys defense considered one of the worst in the NFL. The questions about head coach Doug Pederson and general manager Howie Roseman’s status are in the air in Philadelphia as an era of major changes and decisions is about to get underway.