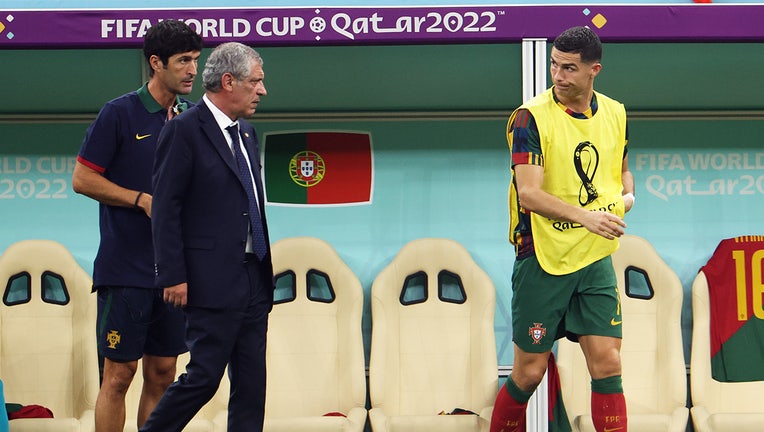 Cristiano Ronaldo of Portugal reacts towards head coach Fernando Santos, during the FIFA World Cup Qatar 2022 Round of 16 match between Portugal and Switzerland at Lusail Stadium on December 06, 2022 in Lusail City, Qatar. (Photo by Francois Nel/Gett

Cristiano Ronaldo did his best to hide his disappointment.

Despite not being named to Portugal’s starting lineup by coach Fernando Santos for Tuesday’s round of 16 meeting with Switzerland — snapping a string of 18 consecutive World Cup starts dating to 2006 — the 37-year-old superstar put a brave face on it before, during and after his team’s dominating 6-1 victory.

Wearing a yellow FIFA bib along with the rest of the Portuguese substitutes, Ronaldo smiled and winked at fans during the warmup. He joined the pile of bodies after Gonçalo Ramos, his 21-year-old replacement in Santos’ starting XI, opened the scoring after just 17 minutes.

He appeared genuinely happy when 39-year-old central defender Pepe, his friend and longtime teammate with both the national team and Real Madrid, doubled the Seleção’s advantage later in the first half with a rare strike — just his eighth in 132 appearances for his country.

Inside, though, Ronaldo had to be fuming.

One of the greatest players of his generation, Ronaldo has made it clear for months, if not years, that he has no intention of riding off quietly into the sunset.

So peeved was he with his lack of a starring role at Manchester United this season — he was still starting some games and coming off the bench in others, at least until he refused to enter a Premier League match in October — that he forced his way out midseason by very publicly and very deliberately torching the club’s owners and manager. 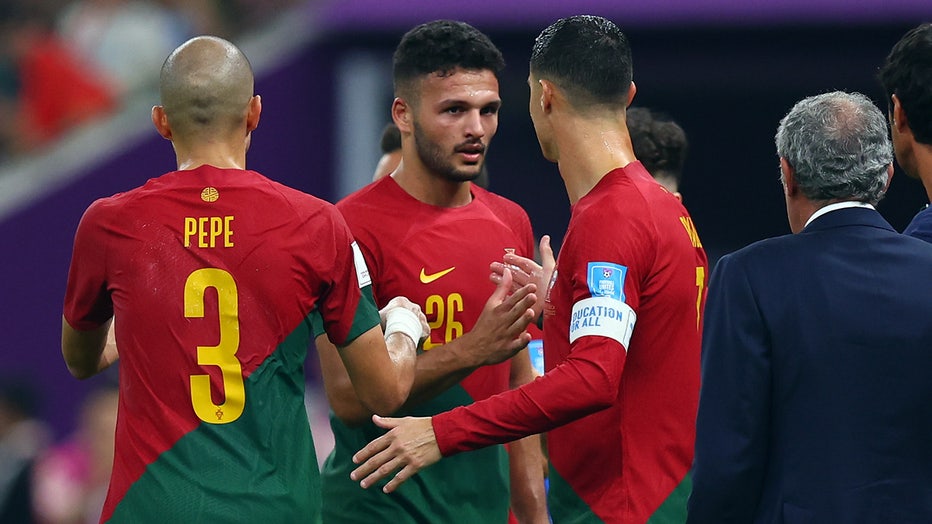 Indeed, Ronaldo had been in Santos’ lineup in each of Portugal’s first three games, and his petulant reaction to being subbed out late in last week’s first-round finale to South Korea understandably infuriated his coach.

Santos insisted benching Ronaldo against the Swiss was tactical, not punitive. That could be true. Ronaldo is a luxury player at this point in his legendary career. Inside the penalty box, he remains as efficient a finisher as there is in the sport. Outside of it, he can’t or won’t do the non-stop defensive running that is required of all modern strikers.

It was still a monumental decision, though.

Ronaldo had played every minute of the last three World Cups for Portugal. Now it’s clear he’ll occupy only a supporting role.

Ramos scored the Seleção's third goal, then completed his hat trick in the 67th minute. He’s not going back to the bench.

And Ronaldo isn’t getting back in again, at least not from the beginning.

How will he handle that humiliation not just publicly, but behind the scenes? Will he be a good soldier in the hopes that his teammates can carry him to his first World Cup title, just like they did when he got injured in the first half of the Euro 2016 final? That was different, to be sure. Ronaldo was the undisputed alpha dog then. Now, if he doesn’t play nice, his battered pride could torpedo Portugal’s hopes instead.

It's hard to know which way it will go. Even in his absence Tuesday, Ronaldo was the main attraction. There were more photographers’ lenses trained on him sitting on the bench before the match than on Portugal’s starters. 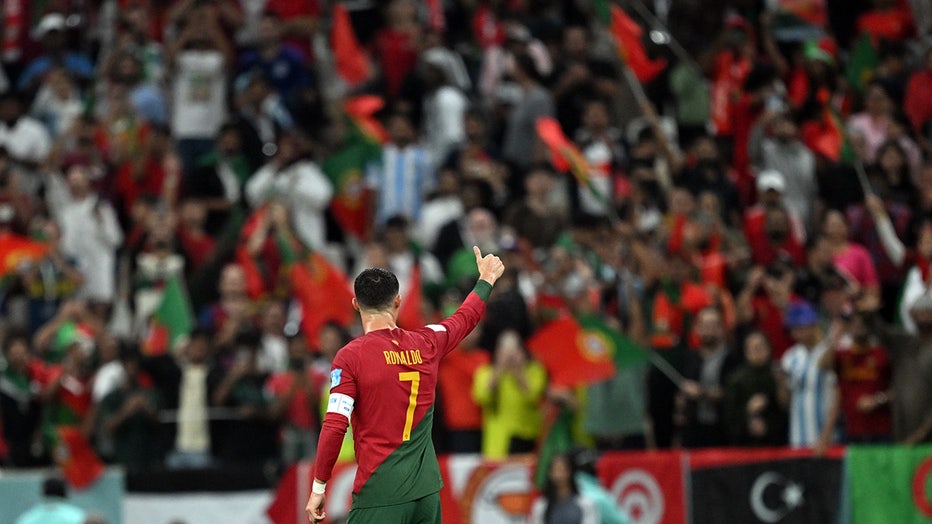 Cristiano Ronaldo of Portugal gestures after the FIFA World Cup Qatar 2022 Round of 16 match between Portugal and Switzerland at Lusail Stadium on December 6, 2022 in Lusail City, Qatar. (Photo by Evrim Aydin/Anadolu Agency via Getty Images)

A recent poll conducted by Portuguese newspaper A Bola claimed 70% of respondents wanted Ronaldo benched, but that wasn’t the reality Tuesday inside Lusail Iconic Stadium. The red and green-clad fans in attendance let out a huge cheer when Ronaldo started to warm up in the second half. Then they began chanting his name.

All of this puts Santos in an incredibly difficult spot.

When their hero finally replaced Ramos with a little more than a quarter-hour to go, the thunderous response was as loud as it was for any of Portugal’s five goals. Pepe dutifully ran over to give him the captain’s armband he’d donned in his stead.

Ronaldo nearly stole the show with a goal that was nullified by the offside flag. Afterward, he led the team in applauding the supporters. He was also the first player to disappear into the tunnel.

Portugal showed Tuesday that they don’t need Ronaldo to win this World Cup. But he’s still going to be not just a story the rest of the way, but the story. He always is. How that story ends has yet to be written.

It will be a fascinating tale either way.

LINK: Get updates on this story from FOXsports.com