PHILADELPHIA - Philadelphia and the Delaware Valley have reached what is likely the final day of this heat wave, but we haven't seen the worst of it yet.

Wednesday is expected to be the hottest day of the year so far before relief sets in for the end of the workweek and into the Fourth of July holiday weekend, but not without a risk for severe storms and flooding.

A heat wave is defined as three or more consecutive days with a high temperature of at least 90 degrees. At Philadelphia International Airport, Sunday was 91 degrees, Monday reached 94 and Tuesday climbed to 95, making this the second official heat wave of the year (June 5-7 was the first).

Temperatures Wednesday afternoon are expected to peak in the upper 90s. The National Weather Service has issued an excessive heat warning through 8 p.m. Wednesday from Trenton to Philadelphia to Wilmington and the surrounding suburbs, where a heat index up to 105 degrees is expected.

"Drink plenty of fluids, stay in an air-conditioned room, stay out of the sun and check up on relatives and neighbors," the NWS wrote in the warning. "Young children and pets should never be left unattended in vehicles under any circumstances."

Wednesday's record-high temperature in Philadelphia is 100 degrees, set back in 1964. Forecasters expect the city to come up just short of the record.

Regardless, the average high this time of year is only 87 degrees, so temperatures are running at least 10 degrees warmer than average for late June.

But it could be much worse. A new record high for the entire country of Canada was set on three straight days Sunday through Tuesday. Lytton, British Columbia, soared all the way to 115 degrees Sunday, 117 degrees Monday and then 121 degrees Tuesday, smashing a Canadian heat record that stood for nearly 84 years by a full 8 degrees.

Scattered thunderstorms are expected across the Delaware Valley late Wednesday afternoon into the first half of Wednesday night, but not every location will see a storm. Some of these thunderstorms could be strong to severe, with damaging wind gusts being the main threat.

NOAA's Storm Prediction Center has placed much of the region under a marginal risk (level 1 out of 5) of severe weather through Wednesday night. The SPC's outlook has parts of the Lehigh Valley and Poconos in a slight risk (level 2 of out 5), as there is a bit more instability present to the north and northwest of Philadelphia, but a widespread severe weather outbreak is not expected. 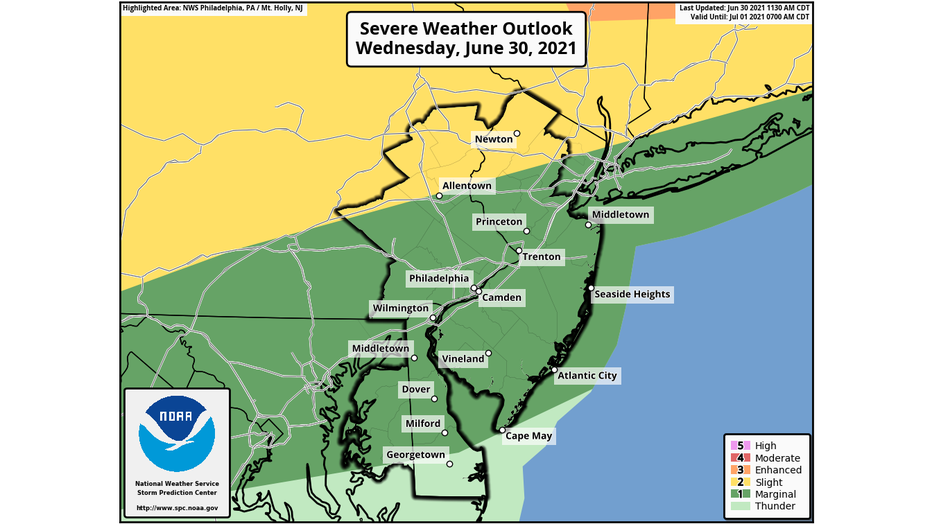 At last, a cold front will start to make its way into our region Thursday, but it might not fully arrive until later in the day. A later arrival means another shot at 90 degrees in Philadelphia to continue the heat wave for a fifth day, while an earlier arrival will keep temperatures in upper 80s and end the heat wave after four days. Either way, it will remain very humid Thursday with dew points in the 70s until the cold front arrives.

Additional showers and thunderstorms are expected Thursday afternoon with the arrival of the front. The SPC has placed our area under a marginal risk (level 1 out of 5) of severe weather again for Thursday, with damaging winds remaining the primary threat.

However, flash flooding is becoming a bigger concern for Thursday. NOAA's Weather Prediction Center has highlighted our entire region for a slight risk (level 2 out of 4) of excessive rainfall that could lead to flash flooding. Periods of showers and thunderstorms will continue into Friday and Saturday as well.

The NWS has placed a large portion of our area under a flash flood watch from Thursday afternoon through Friday morning, noting that total rain amounts of 1 to 3 inches are possible, with a potential for locally heavy rainfall rates up to 2 inches per hour in the heaviest downpours.

The good news is that much cooler temperatures are expected behind the cold front Friday into the holiday weekend, with highs only in the upper 70s to near 80 degrees.

The weather will turn drier for the Fourth of July on Sunday, but a passing shower or storm still can't be ruled out. The final day of the holiday weekend on Monday currently looks mostly sunny and warm – the "pick day" of the extended weekend.