PHILADELPHIA - The midpoint of summer was July 15 since meteorologists and climatologists define summer as the warmest three months of the year – June, July and August – making seasonal recordkeeping a bit easier than the astronomical definition of summer (June 20 to Sept. 21).

When looking at roughly the first half of summer, from June 1 through Sunday, July 18, daily weather observations indicate we've been experiencing a very warm and rainy summer when compared to average conditions over the last 30 years (1991-2020).

The city's average temperature during that period was 76.8 degrees when averaging each day's high and low, and it had tallied 9.42 inches of rain. A typical June 1-July 18 period would have an average temperature of 75.4 degrees, so we're running 1.4 degrees warmer than average. Additionally, there would be 6.41 inches of rain from June 1 to July 18 in a typical year, so the current total is 3.01 inches greater than average. 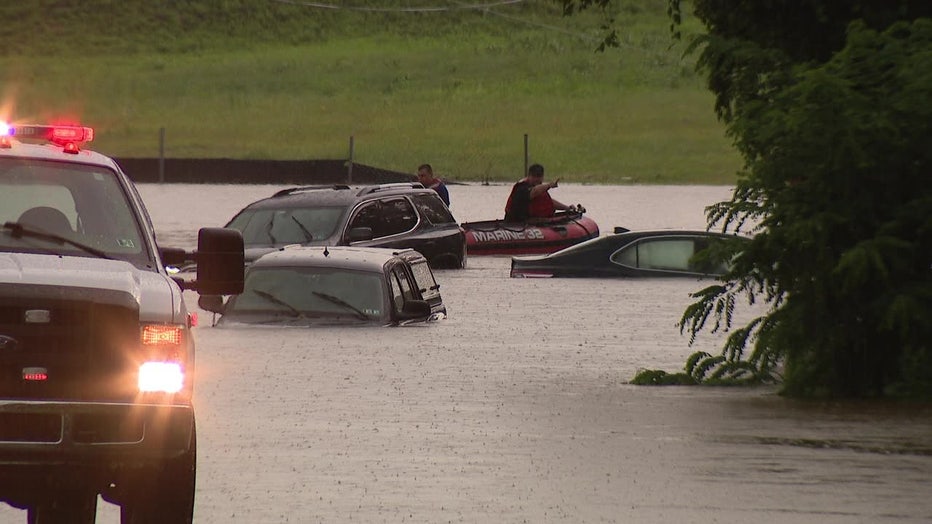 Croydon, Pennsylvania, was the hardest hit by storms on Monday, July 12, as more than 10 inches of rain fell in some areas.

Looking at just the first 18 days of July alone, the month is currently tied for the 20th warmest to date, while it ranks as the sixth wettest July to date. So far this month, Philadelphia has already received 6.36 inches of rain, which is 3.99 inches wetter than an average July 1-18 period (2.37 inches).

Just last week, an estimated 100-year flood swamped Bucks and Burlington counties with 6 to 10 inches of rain in only three to four hours on Monday, July 12. A flood of this magnitude only has a 1% chance of occurring in a given year.

Croydon, Pennsylvania, received the most rainfall, tallying 10.68 inches. Widespread flooding occurred in the area, trapping people in their cars and homes.

On Monday, July 19, Philadelphia reached its climatological peak of summer, with an average high of 88.1 degrees and an average low of 70 degrees.

Average temperatures will begin to decline over the next week, and some 15 minutes of daylight will be lost each week through the remainder of summer, according to the National Weather Service.

A total of 20 days at or above 90 degrees had been recorded in Philadelphia through Sunday. In an average year, 90 degrees or higher would be achieved 30 times. The city's hottest day so far was 97 degrees on June 30.

Prolonged hot temperatures are not expected in the week ahead, however. The NWS said temperatures are likely to trend below average by the end of this week, with highs holding in the mid-80s Thursday through the upcoming weekend.