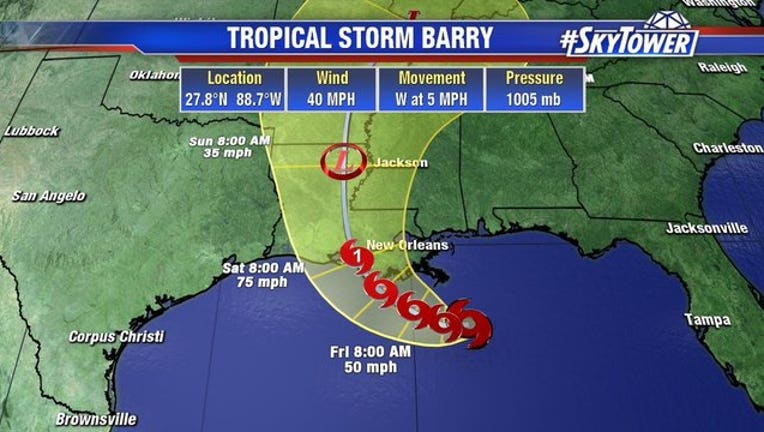 TAMPA, Fla. - The second named storm has formed with the potential to become a weak hurricane before making landfall in Louisiana this weekend.

Tropical Storm Barry continues to swirl in the Gulf of Mexico, and could become a Category 1 hurricane by Saturday. Regardless of whether or not this stays a tropical storm or becomes a weak hurricane, the result is going to be the same. There will be some big flooding issues for most of Louisiana, explains FOX 13’s meteorologist Tyler Eliasen.

“Number one, you’re dumping a lot of rainfall,” he explained. “There will be rainfall totals here of 10 to 20 inches across parts of southern Louisiana [in the next several days].”

The system is moving slowly, which could result in a long duration of heavy rainfall, according to the National Hurricane Center. In addition to that, there could be between four to six feet of storm surge.

“You think about the spin around hurricanes, right?” Eliasen said. “We have onshore flow anywhere east of where the center comes to ashore. So you’ve got an onshore flow of at least a few hours around New Orleans and much of the flood plains of southern Louisiana.” 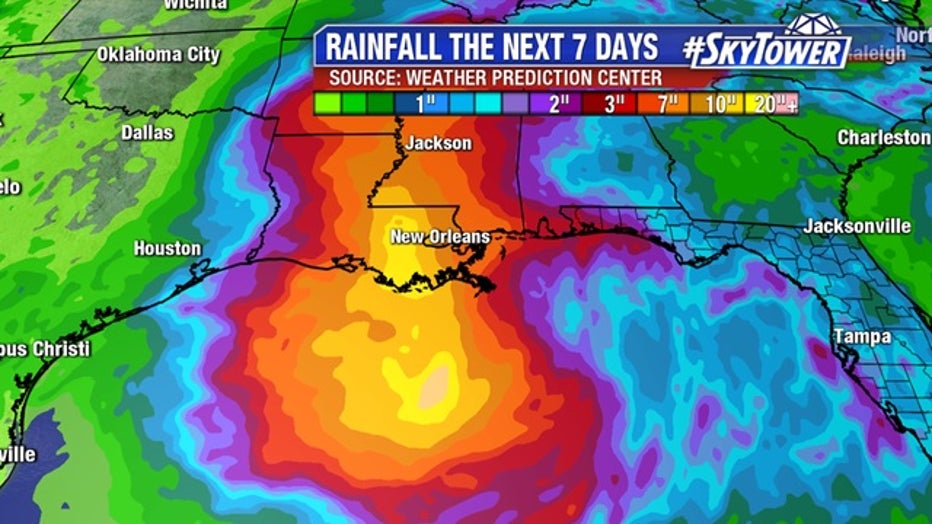 “The flooding issues could be catastrophic in spots,” he said. “Places like Baton Rouge down to Lafayette -- perhaps as far east as New Orleans.”

The levees only protect up to 20 feet along the Mississippi River in Louisiana, and the forecast height for the river is up to 20 feet by Saturday night

“Those will certainly be tested,” Eliasen said. Plus, there will be between 50 to 70 mph winds that comes ashore on Saturday.

New Orleans got an early taste Wednesday of what may be in store. News outlets said a tornado may have been responsible for wind damage to one home, while floodwaters invaded some downtown hotels and businesses as streets became small rivers that accommodated kayakers. The floods paralyzed rush-hour traffic and stalled cars around the city.

The Mississippi is already running so high that officials in Plaquemines Parish at Louisiana's southeastern tip ordered evacuations of some areas to begin Thursday. A voluntary evacuation was called on Grand Isle, the vulnerable barrier island community south of New Orleans. Gov. John Bel Edwards declared a statewide emergency in light of the gathering storm.

A spokesman for the Army Corps of Engineers in New Orleans said the agency was not expecting widespread overtopping of the levees, but there are concerns for areas south of the city. The weather service expects the river to rise to 20 feet by Saturday morning at a key gauge in the New Orleans area, which is protected by levees 20 to 25 feet high.

The Corps was working with local officials down river to identify any low-lying areas and reinforce them, spokesman Ricky Boyett said. He cautioned that the situation may change as more information arrives.

"We're confident the levees themselves are in good shape. The big focus is height," Boyett said.

Edwards said National Guard troops and high-water vehicles would be positioned all over the state.

"The entire coast of Louisiana is at play in this storm," the governor said.

New Orleans officials have asked residents to keep at least three days of supplies on hand and to keep their neighborhood storm drains clear so water can move quickly.

This story was written in Tampa, Florida. The Associated Press contributed to this report.