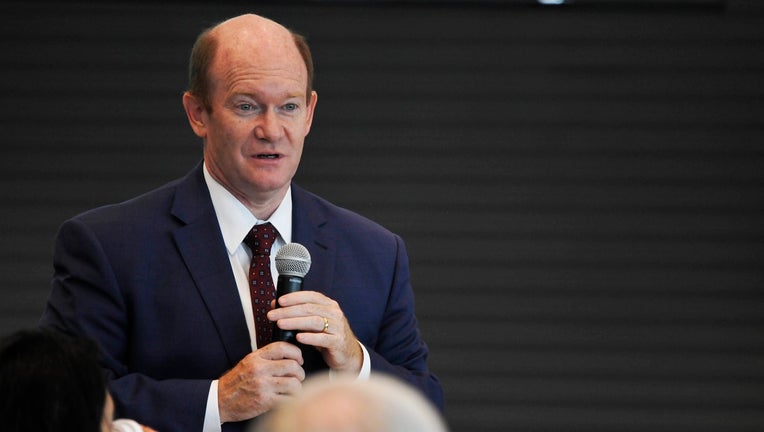 DOVER, Del. - This year’s U.S. Senate race in Delaware is conjuring up comparisons with a campaign a decade ago that resulted in Democrat Chris Coons winning the seat once held by Joe Biden after conservative upstart Christine O’Donnell in a campaign ad famously assured voters she was “not a witch.”

Like O’Donnell, GOP newcomer Lauren Witzke is making headlines this year for her statements and background.

Witzke has promoted QAnon, a baseless conspiracy theory alleging President Donald Trump is battling “deep state” enemies and a child sex trafficking network run by government officials, celebrities and business elites. She also has defended the Proud Boys, a male-only group of neo-fascists who describe themselves as “western chauvinists” and have been known to engage in street violence.

Coons has condemned Witzke’s “embrace” of the Proud Boys and said such groups “pose a real threat to public safety and everyday Delawareans and Americans.”

Witzke recently tweeted, “I’m not sure when patriotic masculinity, defending yourself, and being Christian became ‘Far-Right.’ I also don’t recall the Proud Boys rioting and looting the city of Wilmington like ANTIFA did, either.”

Voter Guide 2020: Everything you need to know about voting in Delaware

Like O’Donnell, Witzke is a conservative Christian and staunchly opposes abortion.

O’Donnell staged a tea party-backed primary upset over longtime congressman and former two-term governor Mike Castle in 2010 after portraying the popular moderate as a RINO — Republican In Name Only. Similarly, Witzke criticized the GOP-endorsed opponent she defeated in September's primary as a RINO, and she's implied many fellow Republicans lack political courage.

But O’Donnell couldn't cast a spell over the general electorate in 2010 and lost to Coons by more than 16 points. Witzke likewise faces a steep uphill battle against Coons in solid-blue Delaware.

Witzke is running on an “America First” platform that includes a 10-year moratorium on immigration, welfare reform limiting benefits to married couples with children and federal funding for faith-based substance abuse recovery programs. She also is a proponent of gun ownership rights.

Coons, who's held his Senate seat since the 2010 special election, favors comprehensive immigration reform and has called Trump's policies “cruel.” He is an advocate of abortion rights and stronger gun control measures.

Here are other highlights of the Nov. 3 election:

Democratic Gov. John Carney is seeking reelection in a race against Republican attorney Julianne Murray, who is suing Carney in federal court over a ban on short-term property rentals amid the coronavirus pandemic.

The race is seen partly as a referendum on Carney’s efforts to stop the virus's spread, including business closures and restrictions that led to thousands of Delawareans filing unemployment claims in record-shattering numbers.

As of mid-August, state officials had received almost 134,000 unemployment claims since mid-March. Over that same period, Delawareans received more than $780 million in unemployment benefits, including $221 million from the state’s unemployment insurance trust fund.

Blunt Rochester, a former state labor secretary, was elected to the House in 2016. She is the first woman and the first person of color to represent Delaware in Congress.

Murphy, a Trump supporter, says he'll work to restore Delaware’s manufacturing base and bring pharmaceutical industry jobs back from China. Murphy retired after 35 years in the railroad industry to pursue an acting career. He's appeared in commercials, film and the Netflix series “House of Cards.”

Regardless of what happens Nov. 3, the General Assembly is sure to have a new look when lawmakers reconvene in January.

Transgender activist Sarah McBride easily won the Democratic primary for a Senate seat that became open when the longest-serving legislator in Delaware history retired. She is likely to become the country's first openly transgender state senator.