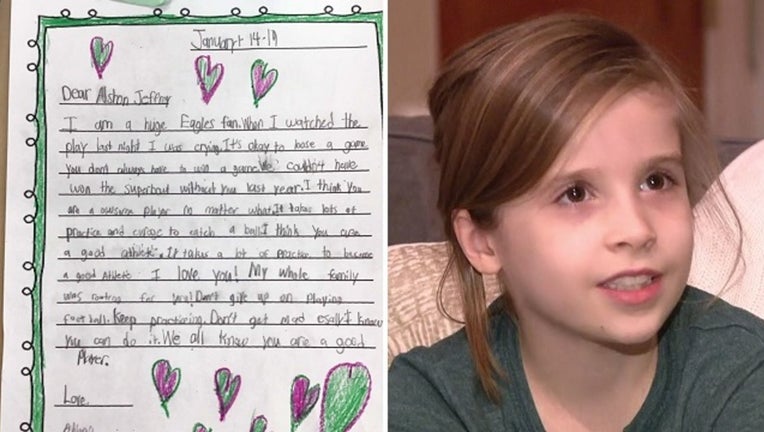 WEST CHESTER, Pa. - A second grader has some uplifting words for Philadelphia Eagles wide receiver Alshon Jeffery, who took the blame for the team's season-ending loss against the New Orleans Saints on Sunday.

Abigail Johnson, 8, says she is a huge Eagles fan and watched in disbelief.

"He was probably crying and thinking to himself I probably let my team down and now I feel like I'm a bad player to my team," Abigail said.

While pundits returned to their Monday morning quarterbacking, Abigail turned to a creative writing assignment in school.

Raymond Johnson, a pastor and father of four from West Chester, shared the letter that Abigail wrote on Twitter.

"Don't give up on playing football," Abigail wrote. "I know you can do it. We all know you are a good player."

Abigail's teacher, Alli Morris, says the students each wrote a letter to boost Jeffery's morale, but that Abigail's letter — decorated in hearts on homemade stationary — was particularly heartfelt.

Abigail's father, Raymond, says she plays soccer and can relate to how Jeffery must have felt.

"We expect it when we're there. We're coaching and [have] some of those moments," he tells FOX 29. "But it was interesting to see that that came out in her writing at that time."

On Thursday, Jeffery surprised Abigail's second grade class in West Chester to thank the students for their support.

The Eagles wide receiver paid a surprise visit to the Chester County school after a class of second graders sent him handwritten letters aimed at boosting his morale.

The full text of Abigail's letter can be found below:

I am a huge Eagles fan. When I watched the play last night I was crying. It's okay to [lose] a game you don't always have to win a game. We couldn't have won the [Super Bowl] without you last year. I think you are [an] awesome player no matter what. It takes a lot of practice and [courage] to catch a ball. I think you are a good athlete. It takes a lot of practice to become a good athlete. I love you! My whole family was rooting for you! Don't give up on playing football. Keep practicing. Don't get mad [easily] I know you can do it. We all know you are a good player.