5 dead, more than a dozen hurt after spate of shootings across Philadelphia Thursday, Friday

PHILADELPHIA - At least five people have died and more than a dozen have been injured during a violent 24-hour span in Philadelphia.

Between 5:30 a.m. Thursday and 5:30 a.m. Friday, police tell FOX 29 a total of 22 people were shot and five of them died. Six of the incidents under investigation taking place within about an hour of each other, starting around 2 p.m. Thursday.

5 dead, more than a dozen hurt after violent 24-hour span in Philadelphia

In a 24-hour period spanning Thursday and Friday, 24 people were shot in Philadelphia, police say. Five of those shooting victims died, including one that suffered a self-inflicted gunshot wound in an incident where a woman was also shot.

Among those killed since Thursday afternoon are a young man believed to be in his twenties, two 32-year-old men, and a 31-year-old man. FOX 29’s Steve Keeley reports that a 33-year-old man also died of a self-inflicted gunshot wound in an incident that also left a woman injured.

Around 1 :45 p.m. in Kensington, police responded to the F and Lippincott Streets after a 37-year-old woman was shot in the thigh. She was hospitalized in stable condition.

In Belmont, police say one man was shot on the 4000 block of Wallace Street around 2 p.m. and two others were injured by broken glass. Police had initially reported that all three men had suffered gunshot wounds or were grazed by gunfire. 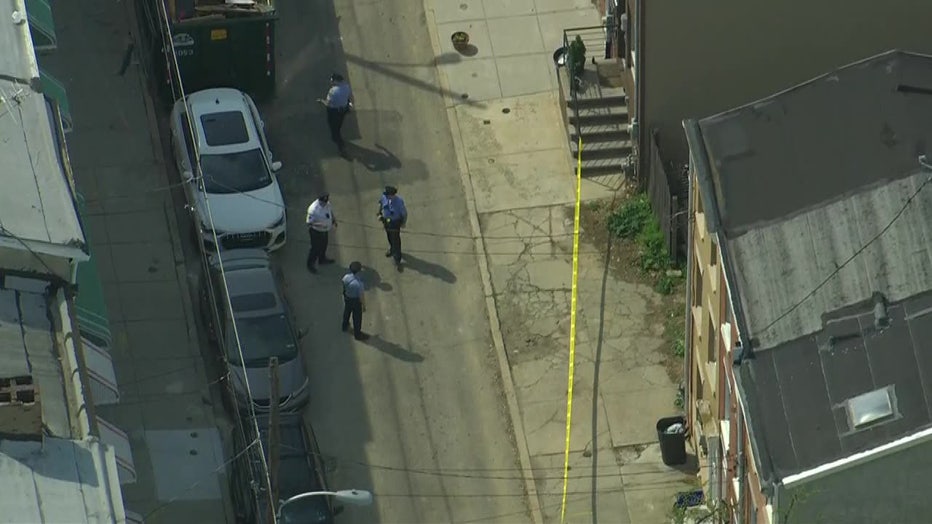 Police respond to the scene of a deadly shooting on Manton Street.

The next incident on Manton Street in South Philadelphia claimed the life of a young man, estimated to be in his late teens or early 20s. Police say he was shot once in the head and was pronounced dead at the scene shortly before 2:30 p.m.

At 2:40 p.m., police say a 25-year-old woman was shot once in the thigh on Walker Street in Mayfair. At the scene, police say they also found a 33-year-old man suffering from what appeared to be a self-inflicted gunshot wound to the head. FOX 29’s Steve Keeley reports that the man later died in the hospital. The woman was hospitalized in unknown condition.

Just after 2:50 p.m., an 18-year-old man was shot twice in the knee on the 4400 block of Holden Street. He was listed in stable condition at a nearby hospital.

Philadelphia police are investigating six different shootings, in which one was killed and nine were injured.

Perhaps the most chaotic shooting unfolded on the 3400 block of Braddock Street in Kensington around 5:30 p.m. Police say an apparent drive-by shooting erupted into a gunfight between seven or eight shooters.

A car involved in the shooting crashed into a parked car and two people fled the scene. Another driver caught in the crossfire was startled by the gunfire and also crashed his car, police said.

Authorities said a 22-year-old man was shot twice and driven to Temple University Hospital in critical but stable condition. Philadelphia Police Captain John Walker told reporters that the injured man was one of three suspected shooters caught by responding officers.

Investigators said several guns were found at the scene of the broad daylight shooting, including an assault rifle that was tossed underneath a car. 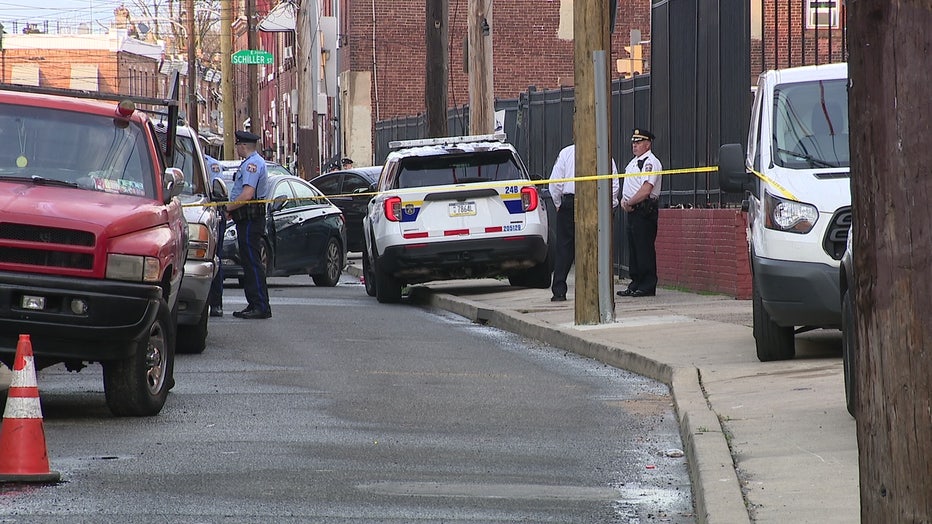 One of the most chaotic incidents of the violent span occurred on Braddock Street.

The violence in Philadelphia continued into the evening as a man, 37, and woman, 33, suffered non-fatal gunshot wounds during a shooting on the 4900 block of Whitaker Avenue in Philadelphia's Lawncrest section, according to police. The woman was listed in critical condition at the hospital, while the man was stable.

Just after 10 p.m. two 32-year-old men were shot and killed on the corner of 67th Street and Greenway Avenue. Investigators say shell casings were found near the victims, indicating the shooter or shooters were standing very close to the victims.

A 54-year-old woman was shot in the hand in Tioga, and a man was taken into custody to be interviewed, police say. A 39-year-old man was listed in stable condition after he was shot twice in the neck on the 3900 block of City Avenue just after midnight.

Overnight, police tell FOX 29’s Steve Keeley that a 30-year-old shooting victim was driven to the Children’s Hospital of Philadelphia after a shooting near Ludlow and Redfield Streets around 4:30 p.m.

The victim, identified as Brandon Williams, later succumbed to his injuries as the hospital.

According to the latest data from the Philadelphia Police Department, there have been 132 homicides in the city this year.

The Mayor’s office pointed to its $184 million investment in safer communities and the new 211 violence prevention hotline and Philadelphia Mayor Jim Kenney addressed the violence in a series of tweets on Friday afternoon.

"The amount of violent incidents over the past 24 hours in our city is devastating. The surge in gun violence that we’ve seen makes me not just heartbroken, but angry. Our administration continues to work relentlessly to reduce violence and create safer communities for everyone," he wrote. "I can’t reinforce enough how tragic and needless this loss of life is. Until we address the availability and ease of access to firearms, we will always be fighting an uphill battle. My deepest sympathies go out to the loved ones of those affected by violence."

Captain John Walker heads a new unit working to solve non-fatal shootings as a means to stop death by gun.

"Difficult night for us. We’re going to have ups and downs and difficult days of the week. I’m confident we’ll get through it. It’s my second time through with this level of violence. It’s always tough," Captain Walker replied.

Walker, a department veteran, did stand for questions, arguing his unit is solving more shootings, but he gets the fear.

"You must understand the fear people continue to sense?" Cole asked.

"I have family and friends. I live in the city. I talk to folks every day. The fear is high. That’s the most difficult thing in law enforcement, reducing fear," Walker answered.

"Do you fear on days like yesterday, that you’re falling back?" asked Cole.

"I don’t. I’m passionate. My passion comes from going to hospitals and seeing the mothers, fathers and grandmothers," Walker replied.