Massachusetts state troopers say 11suspects have been taken into custody following an hourslong standoff that led to closure of Interstate 95 on July 3. (Source: WFXT via FOX Edge)

WAKEFIELD, Mass. - State police arrested 11 suspects after an hours-long armed standoff on a major highway just outside of Boston.

The standoff, which started around 2 a.m. when officers noticed two cars pulled over on Interstate 95 with hazard lights on, prompted shelter-in-place orders in some areas and caused major delays for holiday weekend travelers.

Authorities found a group of men wearing military-style gear armed with long guns and pistols. They refused to disarm themselves, claiming to be from a group "that does not recognize our laws," police told the Associated Press.

Two men have been arrested in an armed standoff that has shut down a major highway in Massachusetts and left some areas under shelter-in-place orders.

According to WBZ, the men belong to the group called "The Rise of The Moors – The Moorish American Arms." They claim to be American nationals, rather than U.S. citizens.

In a video posted to social media Saturday morning, a man who did not give his name, but said he was from a group called Rise of the Moors, broadcast from Interstate 95 in Wakefield near exit 57.

"We are not antigovernment. We are not anti-police, we are not sovereign citizens, we’re not Black identity extremists," said the man who appeared to be wearing military-style equipment. "As specified multiple times to the police that we are abiding by the peaceful journey laws of the United States."

The website for the group says they are "Moorish Americans dedicated to educating new Moors and influencing our Elders." 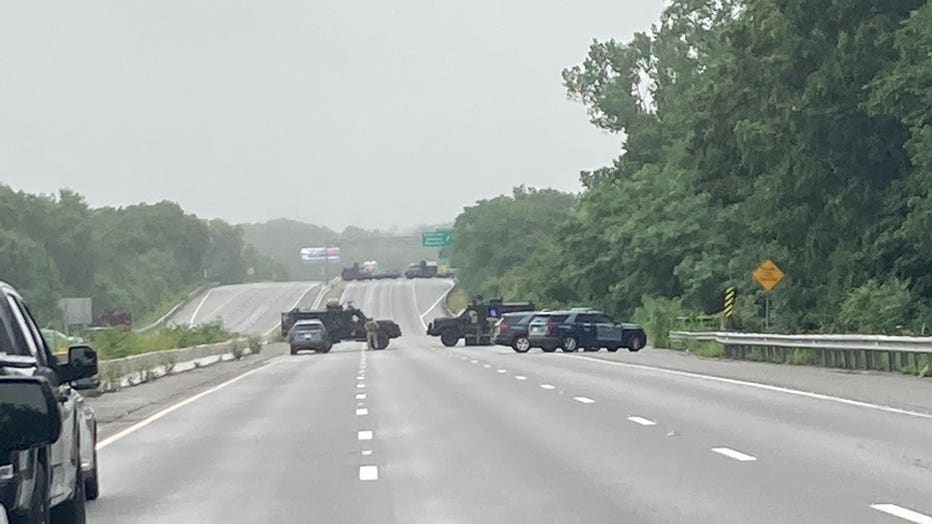 The men fled into the woods where two of them were arrested. Officers used negotiators to communicate with seven other suspects and took them into custody later in the morning.

Two additional suspects wee arrested after being found in ther vehicle, bringing the total in custody to 11.

Police said the shelter-in-place ordered for Wakefield and Reading have been lifted. Traffic flow has resumed on the southbound lanes of I-95 while the northbound lanes remain closed.