The statue depicts the first lady in a blue dress raising her left hand to wave, based on her appearance at President Donald Trump’s 2017 inauguration.

SEVNICA, Sloevnia - A life-size wooden statue of Melania Trump has been erected in the first lady’s home country of Slovenia, but some local residents reportedly think the effigy is a “disgrace.”

The statue is located on the outskirts of Sevnica, Trump’s hometown, and carved out of a tree with a chainsaw. It depicts the first lady in a blue dress raising her left hand to wave, based on her appearance at President Donald Trump’s 2017 inauguration.

The statue was the brainchild of American artist Brad Downey, who commissioned a local “amateur chainsaw sculptor” Ales “Maxi” Zupevc to carve it, according to AFP.

Downey said it's the first monument anywhere dedicated to the first lady and former model. 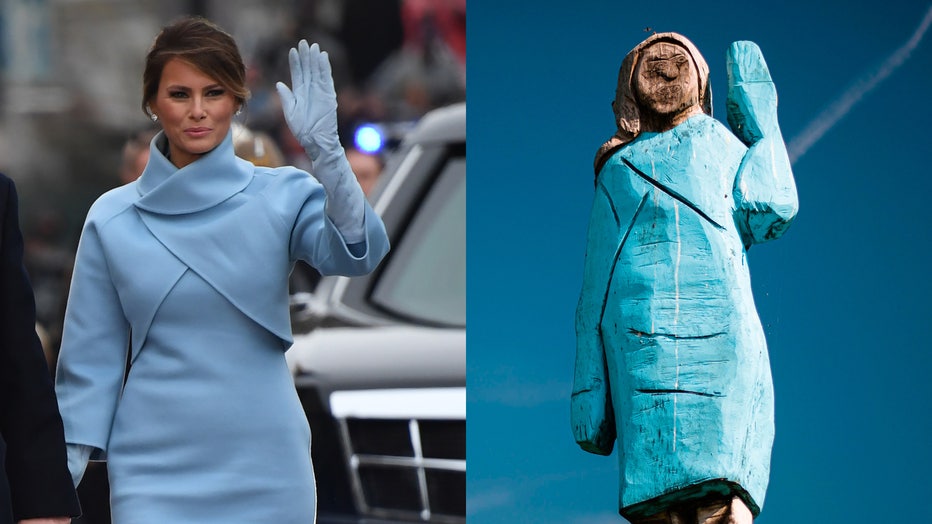 “I can understand why people might think that this falls short as a description of her physical appearance,” Downey told AFP, but insisted that he found the end result “absolutely beautiful.”

Downey said on Instagram that both Maxi and Melania were born on the same year and in the same hospital, “but their lives have taken drastically different directions.”

He told AFP that conversations with Maxi had enabled him to see Trump’s ancestral region through local eyes.

“You see this river that she would have seen as a child, you see the mountains,” he told the news agency.

However, not everyone seemed to be pleased with the statue.

"If the monument was meant to be a parody, then the artist has been successful," Nika, a local 24-year-old architecture student, told AFP. "We in Sevnica can only laugh and, at the same time, hold our heads in our hands over their (the Trumps') catastrophic reputation."

Another person went as far to call it a “Smurfette.”

“It doesn’t look anything like Melania. It’s a Smurfette. It’s a disgrace,” the local resident told ITV.

Katarina, a 66-year-old resident of the nearby town of Rozno, told AFP she thought the statue was a “good idea.”

"Melania is a Slovenian hero, she made it to the top in the U.S.," she said.

According to Downey’s Instagram, the statue will be part of a future documentary film.