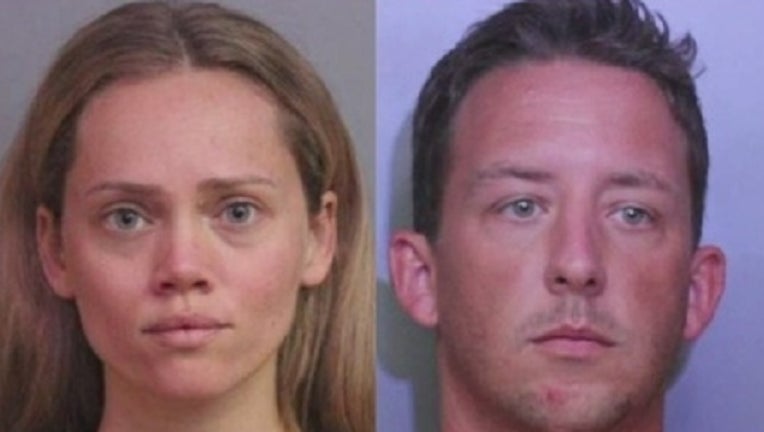 LAKELAND, Fla. - A Lakeland, Florida woman told police she feared for her safety after her estranged husband was arrested for domestic violence against her. So she allegedly snuck into his apartment, took his guns, and turned them over to police.

Police, in turn, arrested and jailed her for five days.

Courtney Irby's arrest has sparked outrage across the state and country, with many calling for charges against her to be dropped. The attorney for her estranged husband says there's a lot more to the story.

June 14, Courtney Irby told Bartow police she and husband Joseph Irby, who share two children and are in the midst of divorce, got into an argument outside the Polk County Courthouse.

She claims he began ramming his vehicle's front bumper into her rear bumper, yelling, and running her off the road. Joseph was arrested for domestic aggravated battery.

The next day, Courtney walked into the Lakeland Police Department and handed them two guns. She told an officer she had a temporary injunction against Joseph Irby, broke into his apartment while he was in jail, and collected his guns.

The officer said, "So you're telling me you committed an armed burglary?"

Courtney Irby responded, "Yes, I am, but he wasn't going to turn them in, so I am doing it."

She was charged with armed burglary and grand theft of a firearm and spent five nights in jail.

Reactions began to flood the internet. Fred Guttenberg, the parent of a Parkland shooting victim, saying "You need to release this woman and protect her from him."

State Attorney Andrew Warren tweeted, "Courtney Irby's arrest is a disgrace. In @HillsboroughFL, we disarm domestic abusers who have legally forfeited their right to having a gun, and we always stand with survivors--not arrest them."

"When I saw this, the fact that she was arrested in an effort to make sure herself and her family would be safe, I was absolutely outraged by it," Eskamani said.

"When you're looking to law enforcement for help, that type of reaction was really misdirected," Eskamani continued. "There absolutely could have been some space to have that dialogue with her and her former partner to mediate the situation versus escalate it through this type of arrest."

Eskamani also released a statement, saying, “In 2018, Florida lawmakers passed a risk-protection order law. In Florida, only a law enforcement officer or agency can file a petition for a risk-protection order, which should have happened in this case. Federal gun laws already protect women from domestic abusers by prohibiting gun possession for people convicted of a 'misdemeanor crime of domestic violence' or subject to a final domestic violence restraining order. But dangerous gaps and weaknesses in the system remain at the state level.

"Senator Lori Berman and myself filed SB1206/HB941 to close these gaps. Our bill requires a person convicted of a misdemeanor offense of domestic violence to surrender (when convicted) all firearms and ammunition in his or her possession to law enforcement. Our bill never got a hearing, but we plan to refile it in 2020."

Meanwhile, Joseph Irby's attorney, Robert Peddy, says Courtney had no right to break into the apartment, and they're concerned she's dramatized the claims. Peddy said his client works hard, is a good, calm family man, and that real facts will eventually come out.

Efforts to reach Courtney Irby and her attorney were not successful. Lakeland police did not respond to requests for an interview.

Both Courtney and Joseph Irby are out of jail and due back in court July 16.