A special moment was captured on FOX 29's Allentown camera.

“Whenever somebody asked how you did guys meet or how did you propose it’s always been one of those sore moments where I can feel the daggers coming my way,” said Robert Hall. He can laugh today about what has been a contentious spot in their marriage over the past 10 years. 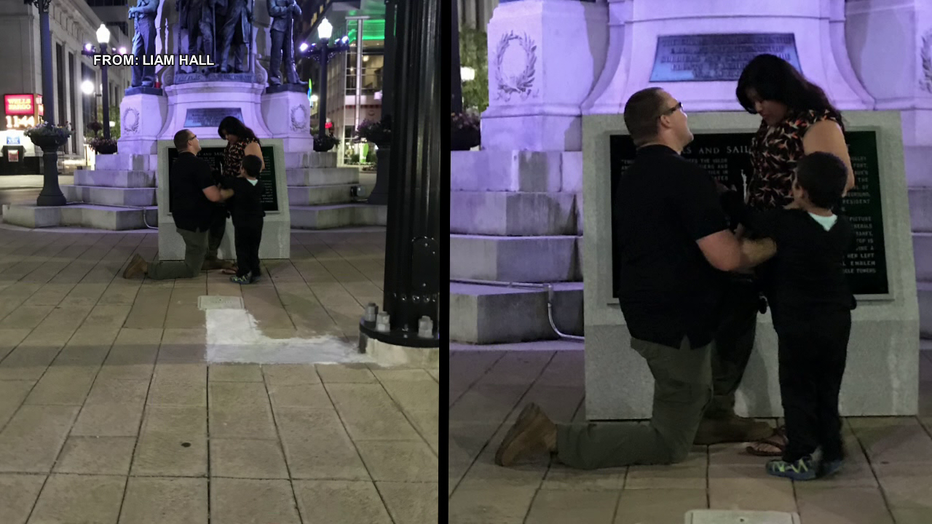 “It’s been a number one complaint that I never really got on my knee to ask her to marry me in the first place,” he said.  On July 19, on their 10th wedding anniversary, Robert made it all right and unbeknownst to him it happened in front of one of our FOX 29 weather cameras in Allentown.

“When he dropped down to the knee I thought he was joking. I’m like it’s our anniversary. I get it. You’re trying to be funny,” said Robert’s wife Adriana.  But it was real. Robert had taken Adriana and their two sons Liam and Rorke out to dinner then to Soldiers and Sailors Monument. He says it was well lit to propose.

“He gets a million points. I’m super lucky,” said Adriana. She says she always wanted this day.

“It’s just the childhood little girl dream you have your whole life. You want your wedding and you want Mr. Prince Charming. The typical get down on your knee and just be like I want to marry you and I love you so much,” she said.

Robert says there were so many roadblocks.  He had planned to do it in Arizona where his family lives but the ring he ordered didn’t come on time and they had to return to Allentown. Then, he could never get a babysitter the nights he wanted to take her out alone. Finally, he decided to just do it. He even put a new ring on it.

Robert now has only one hope.

“This better be the end of it,” he laughed.

The couple met in Hawaii. Robert is a Marine. He was stationed there and they both went to the same church.  They moved to Allentown a year ago to start up a church where Robert is the pastor.