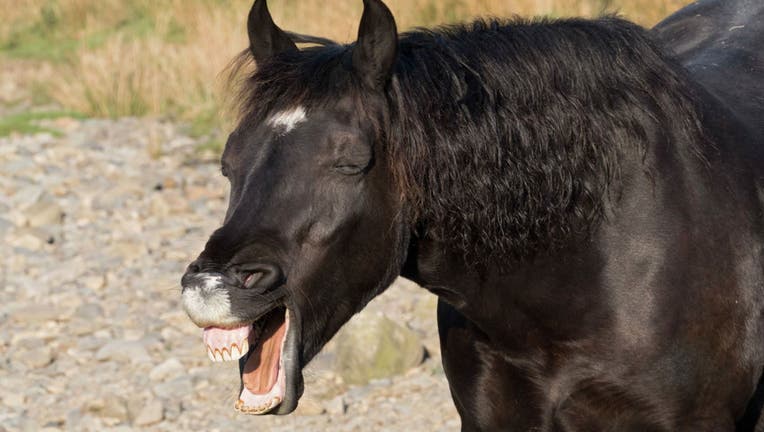 This is the hilarious moment a horse looked like it was hysterically laughing in a field. With its eyes closed and head bowed, the horse flashes its teeth at photographer Paul Williams while in a field in Cumbria.

This is a laughing matter.

A photographer in England has captured the remarkable moment when a horse looks like it is laughing hysterically, news agency SWNS reports.

Paul Williams, who took the pictures in a field in Cumbria, managed to snap the picture at the exact moment the horse had its eyes closed, head bowed and was showing off its teeth as it had just been told a side-splitting joke.

"He was all on his own in the field pulling these funny faces and I just couldn't resist," Williams said in comments obtained by SWNS. "It was quite an uplifting and hilarious moment."

Photographers have captured some remarkable images of mammals in recent weeks. A wildlife photographer at Serengeti National Park captured the moment a lion cub bellowed its first roar, reminiscent of a famous scene in the Disney movie "The Lion King."

Earlier this week, another photographer captured remarkable images of a mother grizzly bear teaching her young cub how to scratch its back in Canada.