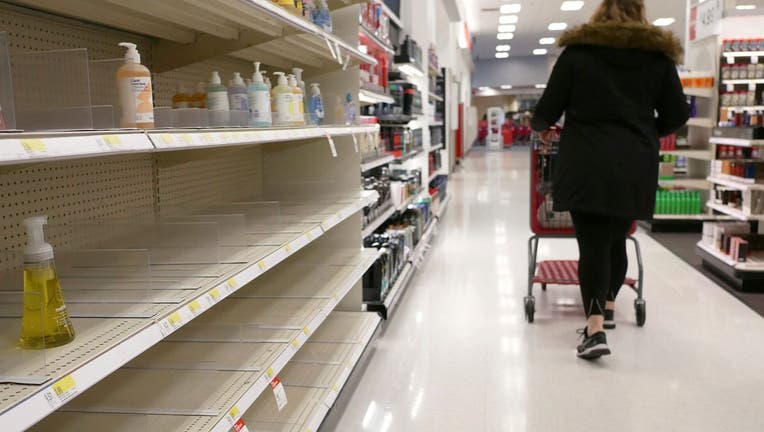 The coronavirus outbreak has caused a run on certain products, leaving some stores with empty shelves. (AP)

(FOX NEWS) -- Amazon has cracked down on a Canadian couple who bragged about cashing in on the coronavirus pandemic with inflated prices for coveted cleaning items.

The Vancouver couple, real estate developers Manny Ranga and his wife Violeta Perez, were purchasing from Costco and then reselling Lysol wipes and liquid cleaners on Amazon at exorbitant prices, the Toronto Star reported.

The paper reported that Amazon had suspended their account on Friday.

The previous day the Star had reported that Ranga, 38, and Perez, 37, admitted ringing up a $30,000 profit through their entrepeneurial price-gouging scheme.

“Everything we do, we're in the moment.” the Star quoted Perez as saying in a published article Thursday. “We're hustlers.”

The paper reported observing Ranga and Perez outside a Costco store near downtown Vancouver loading the back of their Ford F-150 truck with stacks of Lysol disinfecting wipes. Their purchase reportedly left Costco with an empty shelf.

Ranga said that a six-pack of wipes, which might sell for $20 at Costco, could fetch four times that online, according to the paper.

When reached Friday after the Amazon suspension, Ranga said he objected to the way he and his wife were portrayed in the previous day’s story.

British Columbia Premier John Horgan told a news conference Friday that he found it “offensive” that people were using the coronavirus endemic to hoard and resell them online.

“Most people would bristle at that,” Horgan said, according to the Star.